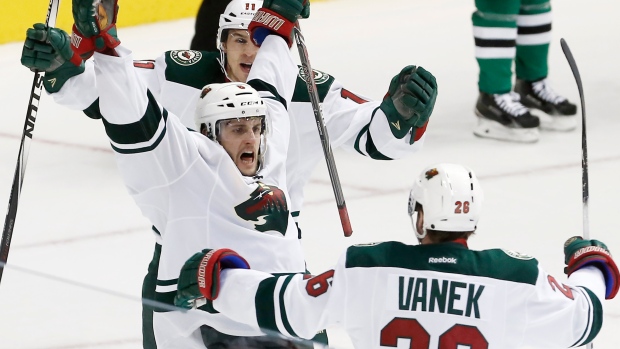 DALLAS - Thomas Vanek isn't sure how Minnesota keeps blowing three-goal leads. He's just happy to try to explain it after a win.

Marco Scandella scored the winning goal 2:04 into overtime, after Vanek pulled the Wild even late in regulation, and they beat Dallas 5-4 on Friday night, handing the Stars their eighth straight OT loss at home.

The Wild have twice failed to protect 3-0 leads in the third period this season, losing to the New York Rangers 5-4 on Oct. 27 and beating Winnipeg 4-3 in overtime earlier this month.

"I don't know what is," said Vanek, who assisted on the first Minnesota goal and Scandella's winner. "I don't think we change our game, but I think it's something that we have to be smarter."

This time the lead vanished in the last 4 minutes of the second period. Ales Hemsky started the Dallas scoring with his first goal in his 22nd game with the Stars since signing a 3-year, $12 million contract in the summer.

About a minute and a half later, Tyler Seguin got his NHL-leading 18th goal on a shot that was stopped by Darcy Kuemper before the puck slid past the goalie. Erik Cole beat Kuemper from the top of the left circle with 11 seconds left in the period to make it 3-3.

The flurry of goals from the Stars came two nights after Kuemper was pulled after giving up four goals in the first period of a 4-0 loss to Los Angeles. He had 41 saves on a season-high 45 shots by Dallas.

Alex Goligoski put the Stars ahead 4-3 by beating Kuemper over the top of his glove off a pass from Seguin with 6:31 remaining.

Vanek's tying goal came with 1:52 left in regulation from the right circle on assists from Ryan Suter and Zach Parise, who had three assists.

"We battled for a point, which is awesome," Stars coach Lindy Ruff said. "There's a lot of good in the game, but we seem to throw something really bitter in there to make it hard for me to stand here and tell you I like most parts of our game."

Minnesota improved to 6-0 against Central Division teams, and Dallas remained winless at 0-6-2 in the division.

The Stars came up short in what would have been their biggest comeback since rallying from 3-0 to beat Chicago 4-3 in a shootout on Feb. 11, 2011, according to STATS.

"They got chances, but we weren't flustered when they scored goals," Scandella said. "We came back. We settled things down and we came back to win."

Dallas lost the finale of a five-game homestand after winning three straight to answer a seven-game losing skid on home ice that was the longest in franchise history.

"Story of season so far," Goligoski said. "It's not like we have one or two lines going and the other two aren't. Seems like it's all or nothing."

Nino Niederreiter got his seventh goal in eight games and team-leading 11th of the season to start the scoring for Minnesota.

Jason Zucker poked in a rebound off Kari Lehtonen's pad on a shot by Nate Prosser for a 2-0 Minnesota lead in the first. Mikael Grandlund made it 3-0 midway through the second when he beat Lehtonen on Jason Pominville's feed.

NOTES: Stars F Ryan Garbutt started a two-game suspension for a knee-on-knee hit on Edmonton's Taylor Hall in the Stars' 3-2 victory Tuesday. He will also be out Saturday night at Colorado. ... Hemsky's goal was his 500th career NHL point in his 12th season. He has 147 goals and 353 assists. ... Both teams played the first of back-to-back games.