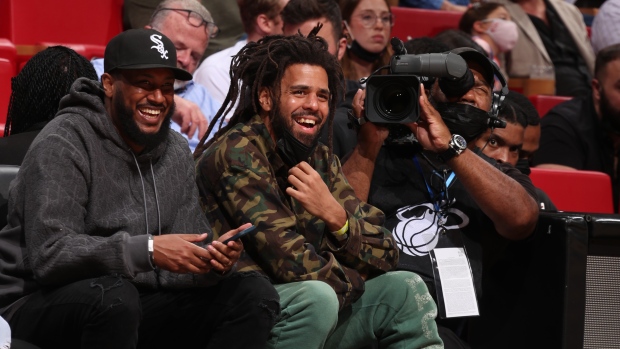 Basketball fans hoping to attend Grammy-winning rapper J. Cole’s first professional game in Scarborough may soon be out of luck.

On Thursday, the Scarborough Shooting Stars of the Canadian Elite Basketball League announced the signing of Jermaine Cole, also known as J. Cole, to their team. Cole previously played professionally with the Basketball Africa League’s Rwanda Patriots BBC in 2021 and is better known for his rap career with albums including last year’s The Off-Season.

Following the announcement, fans were quick to grab tickets for Cole’s first home game. The Shooting Stars’ home arena is the Toronto Pan Am Sports Centre in Scarborough, which has a seating capacity of 2,000. The team’s season tickets are selling fast with users sharing screenshots of an online queue to purchase seats with thousands in the waitlist. Currently, season tickets range from $550 to $1,100.

Single-game tickets for the Shooting Stars’ home games will go on sale for the general public on May 24th. The first two games of their season are on the road, for which tickets are already available. Their second game against the Montreal Alliance on May 29 is already sold out, while tickets for their season opener against the Guelph Nighthawks on May 26 are selling fast.

The Shooting Stars play their first home game against the Hamilton Honey Badgers on June 4, and then play again at home on June 7 against Newfoundland Growlers. With scheduled tour dates beginning on June 10 in New York, it’s unclear if J. Cole will continue to play in the CEBL throughout the season.

On Google, the interest in J. Cole and Scarborough peaked last night as many in North America were interested to learn more about the signing. Other breakout topics searched on Google include the Scarborough Shooting Stars and the CEBL.

@sss_cebl everyone thinking the same thing. Trying to get season tickets for the Scarborough Shooting Stars. #cebl #jcole pic.twitter.com/0GdiG27GUX

J Cole is now an official Scarborough man. What a time to be alive. https://t.co/Wn8hPESsS8

I'm really happy that J. Cole is coming because aside from it just being cool, it's gonna shine a bright light on the CEBL and the Canadian hoops talent. People are gonna tune in/go to game for Cole, sure, but they're gonna be impressed by the level of play and overall talent 🇨🇦

All in all really good for the CEBL and basketball in this country. Little wins like this help grow the game and opportunities for everyone