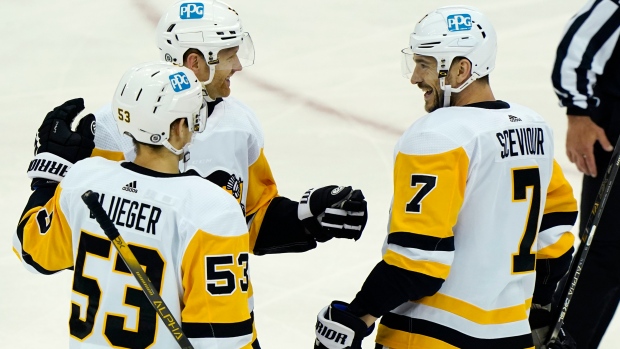 Bryan Rust scored a controversial goal and Jake Guenzel added two late ones as the Penguins won their third straight and improved to 9-2-1 in their last 12. Tristan Jarry was outstanding, making 28 saves.

Guentzel said Sceviour is a solid player who does all the little things for the Penguins.

“Just a guy that comes to the rink every day with a smile and works hard,” Guentzel said. “It’s always nice to see a guy like that get rewarded so, really happy for him and in just this last two games stretch for him of course and three goals here, it’s been big goals for us and we’re definitely lucky to have him.”

Miles Wood and P.K. Subban scored for the Devils, who are 1-4-2 in their last seven. Mackenzie Blackwood had 19 saves as New Jersey fell to 4-15-3 at home.

Sceviour, who was waived earlier in the day, staked the Penguins to a 2-0 lead in the opening 5:26. The veteran picked up a rebound behind the net and came out and tucked the puck into the net at 2:35. He got his second and third in two games on a tip after Pittsburgh benefitted from a questionable non-icing call.

Sceviour said being waived didn't bother him. He's been through it before and he is just happy contributing.

“I think if anyone’s been paying attention this year, not a lot of guys can get picked up,” he said. “Teams don’t have a lot of cap space. Once I went on, I was pretty sure I was going to clear and focusing on getting ready for today’s game. And that was kind of my mindset.”

The game had a number of iffy calls by the officials, with the biggest one coming late in the second period. Wood had gotten New Jersey within a goal in the first period and Devils dominated the middle session, outshooting the Penguins 14-6.

Pittsburgh surged late in the period and Rust scored his 17th on a shot from between the circles with Guentzel screening Blackwood. Devils coach Lindy Ruff challenged the goal, saying Sidney Crosby pushed defenceman Ty Smith into Blackwood, interfering with the goaltender.

Replays showed there was a push and contact, but the goal stood. On the ensuing power play early in the third period Guentzel scored. He added an empty-net goal late.

Devils coach Lindy Ruff said he had to challenge the goal by Rust.

“I thought they gave Ty Smith a pretty good shot that ended up being bumping into our goaltender,” Ruff said. “At the same time, it seemed like the other guy was in the crease, which didn’t allow Blackie to make the save. And I really feel that the fact that Ty hit it, it spun Blackie and he wasn’t able to make a quality attempt to save the puck. So I thought the challenge was the right thing to do, You don’t win them all.”

WAITING FOR A DEAL

The Devils held out veteran defenceman Dmitry Kulikov in anticipation of a possible trade by Monday's deadline. Earlier in the day, New Jersey acquired defenceman Jonas Siegenthaler from the Washington Capitals for a 2021 third-round pick.

NOTES: Devils RW Marian Studenic made his NHL debut. ... Penguins F Teddy Blueger returned to the Penguins lineup after missing 13 games. ... Devils C Pavel Zacha left the game early in the second period. Ruff had no update on his condition after the game. ... Penguins D Brian Dumoulin got an assist on the Rust goal and now has a career-high five-game point streak. ... Pittsburgh F Evgeni Malkin, who missed his 13th straight game, has been skating and is closer to returning.

UP NEXT Penguins: Have three days off before facing Flyers at home on Thursday. Pittsburgh went 4-2 on its six-game trip.

Devils: At home Tuesday night to play the first of four straight against the New York Rangers.