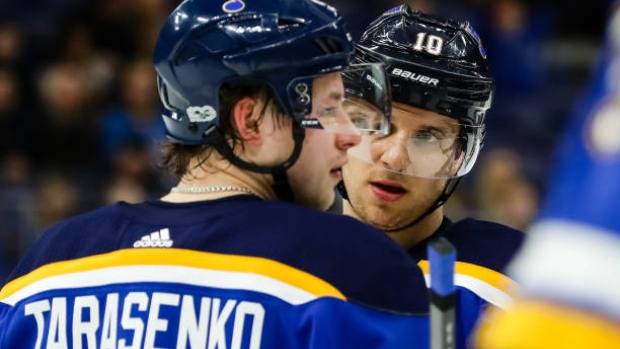 It's fair to say Brayden Schenn was caught off guard Monday when the St. Louis Blues traded centre Paul Stastny to Winnipeg Jets for two draft picks and a prospect.

The Blues currently sit just one point back of the Los Angeles Kings for the final wild-card spot in the Western Conference. However, general manager Doug Armstrong decided to become a seller after watching his team post six straight losses dating back to Feb. 11.

“Really one or two points out and move a guy that does a lot for us,” Schenn told the St. Louis Dispatch after the trade. “I didn’t expect Stastny to be moved, but I guess with his contract expiring, them getting picks to be used elsewhere or to draft, you kind of just go from there and we’ll see what happens in the next hour here.”

Armstrong said he was willing to flip the Jets' pick to acquire a roster player, but couldn't find a match around the league over the final hours of the trade deadline.

“Maybe it will fire guys up, give guys more opportunity to do more and that’s one way you can look at it,” Schenn said. “Teams that are one or two out are kind of loading up right now and we’re one or two out and we kind of... went the other way.

“As a team right now, we’re obviously struggling, there’s no doubt about that. Maybe this shakes things up and who knows? I still believe the mood in that locker room after we made that trade is still going to fight the last 18 or 19 games we have left here to make the playoffs and that’s not going to change.”

Blues head coach Mike Yeo said last week the Blues had to "stop the bleeding" after posting four straight defeats, but the team followed up those comments with two consecutive 4-0 losses.

“Two or three weeks ago I didn’t envision this being an option today,” Armstrong said of dealing Stastny. “We were, I don’t want to say comfortably in (the playoffs), but we were in the top portion of our conference and our division.

“And the last couple of weeks we haven’t played to a level that kept us there. I started to look at what was best for us moving forward. I talked to Paul on Thursday and said, ‘I hope that we play well on Friday and Sunday and this isn’t an issue, but if we don’t turn it around, I have to do my job also.’ “

Now without Stastny, the Blues will try to regain their playoff position against the Minnesota Wild on Tuesday night.