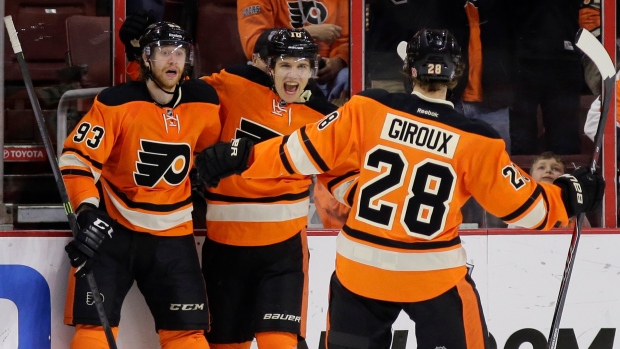 PHILADELPHIA - The Flyers have had success lately against the league's top teams. So it was no surprise the Red Wings were the latest to fall.

In the last 14 games, Philadelphia is 5-0-3 against current playoff teams while 0-5-1 against nonplayoff teams.

"We obviously lost a lot of points to teams that maybe we should've beaten," Flyers coach Craig Berbue said. "I've said it before if you don't give the effort and preparation to any opponent, then you're going to get beat."

The Flyers certainly gave the effort against slumping Detroit.

Philadelphia, which matched a season-high for goals in a game, stood four points out of a playoff spot just seven days ago but plummeted to 10 points back of the Bruins with four straight losses that began with last Saturday's overtime defeat in Boston.

Justin Abdelkader and Erik Cole scored for Detroit, which opened a four-game road trip by losing its fourth game in the last five.

"Too many games when other team is faster, stronger from the start," Detroit captain Henrik Zetterberg said. "We're talking about it, but you can't just talk about it. You have to show it too. Enough is enough."

The Red Wings were defeated for the 10th straight time on the Flyers' home ice. Detroit's last victory in Philadelphia came during Game 2 of the 1997 Stanley Cup finals.

"You come off it a little bit in this league and you can't win, and I think that's evident," Detroit coach Mike Babcock said. "If this isn't an exclamation mark, I don't know what is."

Schenn scored his second goal just 11 seconds into the third period on a rebound after Jakub Voracek's shot went off Jimmy Howard's pad from a sharp angle to make it 4-1. Fans littered the ice with hats, thinking it was Schenn's third goal. However, just as the hats were being cleared off the ice, PA announcer Lou Nolan announced a scoring change to Philadelphia's first goal, which originally was credited to Schenn but changed to Simmonds.

"(Simmonds) tried to be a nice guy and give the goal back to me, but he deserves it," Schenn said.

Bellemare's tally on a rebound seven minutes later gave Philadelphia a four-goal lead before Cole's power-play deflection with 9:03 left pulled Detroit within 5-2. Read and Rinaldo scored within a minute of each other late in the period to complete the scoring.

"It's almost like we're hiding out there," Zetterberg said. "We don't want the puck. If you have it, you'd rather give it to someone else. . You have to be able to make a five-foot pass to your teammate and we're not doing that right now."

Detroit dominated the second period, outshooting Philadelphia 18-6, but each team finished with one goal apiece. Abdelkader pulled Detroit within 2-1 4:14 into the period when he got in alone against Steve Mason after a long pass from Zetterberg and beat Mason through the five-hole. But Schenn made it a two-goal game with 6:21 remaining in the second when he scored on a rebound from Howard's doorstep on the power play.

Howard saved Claude Giroux's initial shot from the left circle and also stopped Simmonds' follow attempt. But the rebound found Schenn, who backhanded the puck into an empty net. Before Schenn's goal, Mason kept Detroit from tying the game with a glove save on Tomas Tatar's wrist shot from the slot.

Simmonds gave Philadelphia a 1-0 lead 5:22 into the first period on the power play when he deflected Mark Streit's shot from the point through Howard's legs. The goal, originally was awarded to Schenn, ended an 0-for-10 home skid on the power play for the Flyers, who entered 1-for-19 on the man-advantage overall in their last seven games.

It was the ninth straight game in which Detroit has allowed a power-play goal, its worst streak since surrendering nine in a row on the man-advantage in December 2010.

"Our penalty kill at one time was our greatest strength and today we were paralyzed," Babcock said. "We just stood there and weren't aggressive."

Zetterberg didn't score for the 15th straight game, marking the longest stretch of his career. He assisted on Abdelkader's tally.

Notes: Flyers forward R.J. Umberger will have surgery Wednesday on his right hip and will be out 10 weeks. ... Giroux ended a three-game stretch without a point with a pair of assists. ... Detroit has been outscored 44-17 during their losing streak in Philadelphia. ... Flyers D Michael Del Zotto (upper body) missed his fourth straight game. ... Detroit F Stephen Weiss returned to the lineup after two games as a healthy scratch, replacing Tomas Jurco, who took a stick to the face in Thursday's loss to Columbus. ... Jonas Gustavvson (concussion), Darren Helm (upper body) and Alexey Marchenko (upper body) also sat for Detroit.