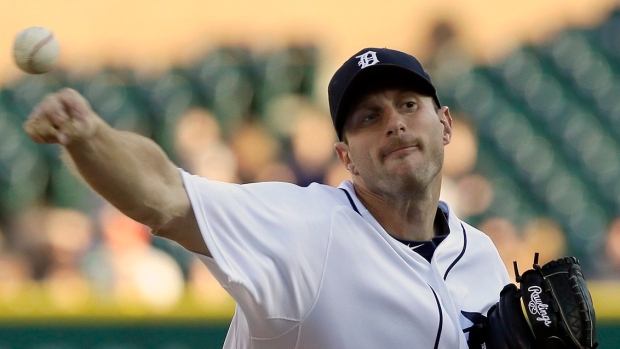 DETROIT - Max Scherzer could have probably pitched one more inning after breezing through the first eight.

Detroit's powerful offence made that unnecessary.

Scherzer allowed two hits and struck out seven, and the Tigers backed their star right-hander with three early homers in an 8-1 victory over the Tampa Bay Rays on Thursday night.

With a big lead and Scherzer's pitch count in triple digits, manager Brad Ausmus decided to go to the bullpen for the ninth inning, instead of sending his starter back to the mound for three more outs.

"I had it in me to be able to do it, and I had an extra day (of rest) coming up this next time," Scherzer said. "But given the context of the game, it wasn't the right decision for me to go back out there. It's an 8-1 game. I've got my work in."

Scherzer retired 23 of the last 24 hitters he faced, and Ian Kinsler, Victor Martinez and Torii Hunter all homered as part of a five-run first inning for the AL Central-leading Tigers, who have won 12 of 14.

Scherzer (10-3) allowed a first-inning sacrifice fly by Evan Longoria, but that was the first of 10 straight hitters retired by the reigning American League Cy Young Award winner. After allowing a single in the fourth, Scherzer retired another 13 in a row before he was pulled with a pitch count of 106. There would be no talking the manager into another inning. Ausmus met Scherzer in the dugout and shook his hand.

"He was done. I was just confirming to him that he was done," Ausmus said. "It didn't really matter what he said. That was going to be the end for him. There was no reason to send him back out at that point."

Miguel Cabrera had two doubles, a single, a walk and four runs for Detroit.

The Rays are still at the bottom of the AL East, and the improved starting pitching that fueled their recent run was nowhere to be seen Thursday. After a leadoff single by Austin Jackson in the first, Kinsler homered to put the Tigers ahead. Cabrera's walk was followed by Martinez's 21st home run.

Hunter added a solo shot with one out to make it 5-1.

It was Martinez's first game back after he missed three with soreness in his side.

Cabrera doubled in the second and scored on J.D. Martinez's single. He also scored on a single by Hunter in the fourth.

Scherzer, coming off a 13-strikeout performance against Houston in his previous start, fanned seven with a walk, and the Detroit defence played well behind him.

Nick Castellanos made a diving catch in the third when Desmond Jennings hit a line drive to the third baseman's left. Then Detroit shortstop Eugenio Suarez jumped high in the air to snag a liner by Ben Zobrist.

Maddon may have scored points with pop music fans of a certain age, but he couldn't have enjoyed watching his hitters scuffle against Scherzer. James Loney's single in the fourth was the only baserunner the Rays managed after the first inning.

"We had some good at-bats," Maddon said. "I thought we played well today, but we just got ourselves in a hole, and that let him be more aggressive."

Scherzer has only one complete game in his career — a shutout of the Chicago White Sox less than a month ago.

NOTES: The Tigers sent substitute Don Kelly to the on-deck circle in the fourth instead of Castellanos. Ausmus said Castellanos was in the bathroom, and Detroit wanted someone in the on-deck circle if there was a play at the plate — to signal to the runner whether to slide. ... Scherzer has reached 10 wins every year since the Tigers traded for him before the 2010 season. ... Detroit LHP Drew Smyly (4-7) faces Tampa Bay RHP Alex Cobb (3-6) on Friday night.