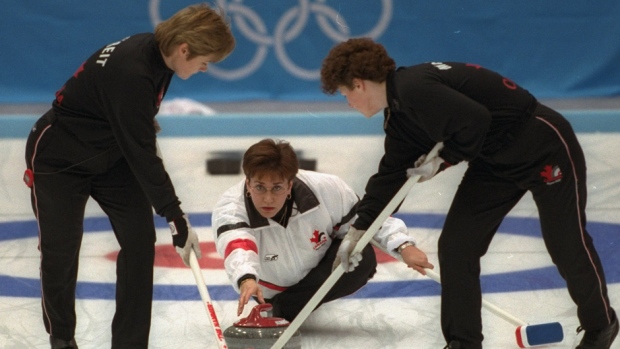 The legacy of the great Sandra Schmirler continues to live on as the annual telethon to help raise money for babies born too soon, too small and too sick runs all day Sunday at the Scotties Tournament of Hearts for the 20th straight year.

Two decades after her death, her legacy lives on.
Today is the @SandraSchmirler Foundation on @TSNCurling and we're ready for your donations to help babies: 💻 https://t.co/TKMnBqylr2 or ☎️ 1-866-210-6011
Watch our Facebook Live starting at 9:30 am ET 🍿 https://t.co/c0aQlz6dWN pic.twitter.com/0HeLiWcbjO

The Biggar, Sask., native was a curling rock star in the 1990s, winning three Canadian championships, three world titles and the first ever Olympic curling gold medal at the 1998 Winter Games in Nagano, Japan.

In early 2000, the 36-year-old Schmirler tragically passed away from cancer during the height the of her career.

Today, the Sandra Schmirler Foundation strives to raise money to purchase life saving equipment for babies born prematurely and critically ill. Schmirler's daughters, Sara and Jenna, have helped to  keep their mother's legacy alive and well through the annual Telethon at the Scotties.

Two decades after her death, her legacy lives on.
Today is the @SandraSchmirler Foundation on @TSNCurling and they are ready for our donations to help babies: 💻 https://t.co/HOFPbIuHze or ☎️ 1-866-210-6011 #ChampionsStartSmall

Today is a special day at the Scotties. @SandraSchmirler was a legend and her legacy is one of generosity and compassion for miracle babies. @BennyHeebz & @johnnymocurler reflect on meeting Sandra after her Olympic gold. https://t.co/PKtEl5DH1z #ChampionsStartSmall

As our Telethon begins live on Facebook before @TSNCurling's morning draw we go from coast to coast to coast to show where your donations go. Brier and World champion @CraigSavill is from Ottawa where we've given over $130,000 to hospitals. #championsstartsmall pic.twitter.com/KegfSCFOTK

Alberrrrrrta! Your donations have helped us give over $470,000 to hospitals across that province. Carey-Anne McTaggart of @teamscheidegger had a son who required stays in two Alberta NICUs. @carebear_99#ChampionsStartSmall pic.twitter.com/OX2L2qYRLB