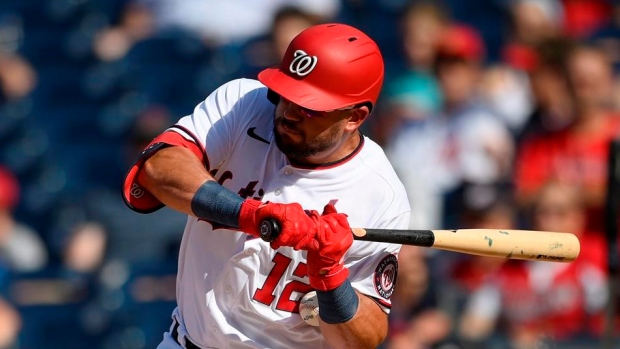 ST. PETERSBURG, Fla. (AP) — Newly acquired slugger Kyle Schwarber is looking forward to the challenge of playing first base for the Red Sox.

Boston plans to take a serious look at Schwarber playing the unfamiliar position when he is ready to return from a hamstring injury,

“For me, I view myself as a pretty good athlete,” Schwarber said Saturday before the Red Sox played at Tampa Bay. “I’m not a guy that’s going to shy away from something. I just want to be able to go out there and make sure you have the basics down. I know that, obviously, there’s a sense of urgency here where the club’s at.”

Boston began Saturday leading the AL East by a half-game over the Rays.

Schwarber was acquired Thursday from Washington for a minor league pitcher.

“It’s definitely a little whirlwind there,” Schwarber said. “Getting the call late that night and trying to scramble and make sure you get everything in order.”

“I think it’s not going to be too long,” Schwarber said. “Trust me I’m itching to get back out. It’s been too long and I’m ready to get back out there and play baseball.”

Schwarber, who was hitting .253 with 25 homers and 53 RBIs in 72 games, last played on July 2. He hit .412 in the 2016 World Series, helping the Chicago Cubs win their first championship since 1908, after playing just two regular-season games in early April before tearing the ACL and LCL ligaments in his left knee.

Schwarber is not the only key reinforcement expected to join the Red Sox in August.

Left-hander Chris Sale allowed one run and five hits over five innings in an 81-pitch outing during his fourth rehab start with Triple-A Worcester against Buffalo Saturday as he continues his comeback from Tommy John surgery. He struck out seven and walked one.