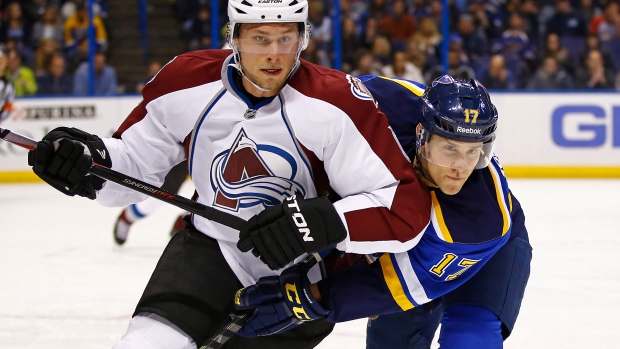 ST. LOUIS - It was the perfect way for the St. Louis Blues to glide into an extended All-Star break. Lots of positive energy with nine days between games.

"We've been rolling and we wanted to keep it going," forward Alexander Steen said after the Blues dominated at both ends of a 3-1 victory over the Colorado Avalanche on Monday night. "Tonight I think was probably our best game this year, from goalie out."

Jaden Schwartz had a goal and assist and Brian Elliott needed to make just 17 saves, although he had to be sharp at times. Elliott leads the NHL with a 1.86 goals-against average and is fourth with a .930 save percentage.

"You try to be big, big in net and get us through the first little wave," Elliott said. "And the guys take care of the rest. As you saw, the second and third period we did the things we always do and that's a good sign."

T.J. Oshie also scored and defenceman Carl Gunnarsson got his second goal of the season for the Blues. St. Louis has scored in a season-best eight consecutive games, going 7-0-1 in that stretch.

They're two points behind Central Division-leading Nashville, although the Predators have played two fewer games. They don't play again until wrapping up a seven-game homestand against Nashville on Jan. 29.

Steen had two assists, giving him 18 points during a 10-game points streak, the longest by the Blues this season. Ken Hitchcock got his 153rd win with St. Louis, tied with Brian Sutter for second on the franchise list.

The Blues have won eight of nine at home against Colorado, including a 3-0 shutout by Martin Brodeur on Dec. 29 in which the Avalanche were held to 16 shots. They'd taken 21 or more in each of the 10 games since that loss.

Matt Duchene scored for the Avalanche, who finished 1-2-2 on a five-game road trip.

"They outplayed us, there's no question," forward Jarome Iginla said. "Once they get the lead they're a good defensive club and they're playing well right now."

Schwartz scored his third goal in five games on a power play at 32 seconds of the second period to snap a 1-all tie. He got the puck right back and beat Semyon Varlamov after his first attempt deflected off the skate of Colorado defenceman Erik Johnson.

"Kind of a lucky bounce," Schwartz said. "It came right back to me and Varlamov was cheating from the first shot, so it felt good when it went in."

Oshie did some nifty stick-handling to set up his 13th goal at 10:40 off assists from David Backes and Steen to close the scoring.

Gunnarsson gave the Blues a 1-0 lead with his first goal since Nov. 13 when his point shot deflected off the stick of Alex Tanguay. He'd totalled three assists in the previous 19 games.

A giveaway by Kevin Shattenkirk led to Duchene's 13th goal with 6:58 left in the opening period, as the puck ticked off the stick of Blues forward Paul Stastny.

"It's always tough to win the last one but at the same time we knew it would be a good test, a good challenge," coach Patrick Roy said. "I'll give them credit, they played a good game."

NOTES: Steen has seven goals and 11 assists during his point streak, but his goal streak ended at five games, one shy of his career best last season. ... The Blues have an NHL-best plus-37 goal differential. ... The Blues are 17-1-2 leading after two periods. ... Attendance of 19,187 was the Blues' ninth sellout and fourth in six games of a homestand that concludes against Nashville Jan. 29. ... Backes played his 613th game with St. Louis, tied with Hall of Famer Al MacInnis for eighth on the franchise list.