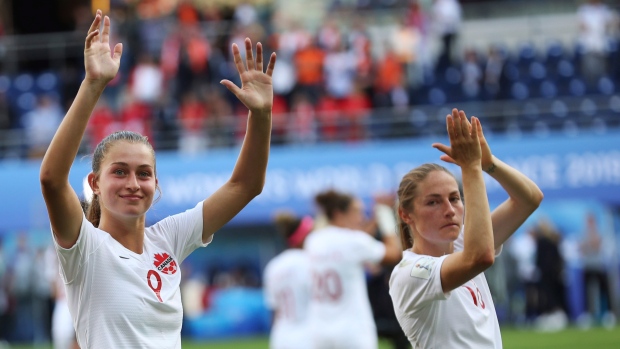 GRENOBLE, France — Safe to say, members of the Canadian women's soccer team have the music in them.

From grooving to Shania Twain's "Man! I Feel Like A Woman" on the team bus to flossing during an impromptu rendition of "O Canada" on a stadium visit at the Women's World Cup, the Canadians don't need much incentive to belt out a song or shake a leg.

"Everybody can relate to music and I think that's the beauty of it," said veteran midfielder Sophie Schmidt. "It just brings people alive and makes you want to move. You can't have a bad time listening to music and so I think our team thrives on that

"We're a music culture. It's amazing to see people singing, dancing. People who are sometimes in their shell, they come alive when songs come on so it's great to see."

"We all request the music and she then creates the playlist," said defender Kadeisha Buchanan, a hip-hop and reggae fan. "The team has a wide range of music (interests). She does a great job of mixing in the old and the young, pop and country."

Labbe says she does the best she can with the suggestions she gets.

"Sometimes it's a little difficult. I've got to hunt people down to get those option. But yes, I get suggestions and then I kind of fill it in with my own taste of music. I try to please everybody."

The team playlist can also tell a story. Captain Christine Sinclair, no fan of being in the spotlight, was quietly singled out by including Stevie Wonder's "Happy Birthday" early in the playlist at training the day she turned 36.

"Great performances by all three. Shania would be proud."

Indeed she was. Twain responded to the video with a "LET’S GO GIRLS!!" tweet, accompanied by a hands raised-in-celebration emoji.

As for dance moves, the team has no shortage of women who can move. Midfielder Desiree Scott, for example, is a certified Zumba instructor. Buchanan counts the Whip among her dance moves.

Some players have their own musical must-listens.

"I have to listen Michael Jackson's 'Man in the Mirror' before ever game. It started in college," Sinclair confesses.

"I think it takes a lot of energy out of me if I'm listening to hard-core rap too long before a game. I don't think Kadeisha and I would bode well as roommates," Quinn said with a laugh.

But she still appreciates the pre-game soundtrack.

"Once we get into the locker-room I really enjoy having other people set up a playlist because it's not something that would be in my normal repertoire," she added. "But at that time, it's the time to go so it works."

Asked about the team's victory song, Buchanan said the best choice is DJ Khaled's "All I Do Is Win," featuring Ludacris, Rick Ross, T-Pain & Snoop Dogg.

Labbe was more circumspect, however.

"That might have to remain within the team for now. But I'm sure it'll (come out) at some point."