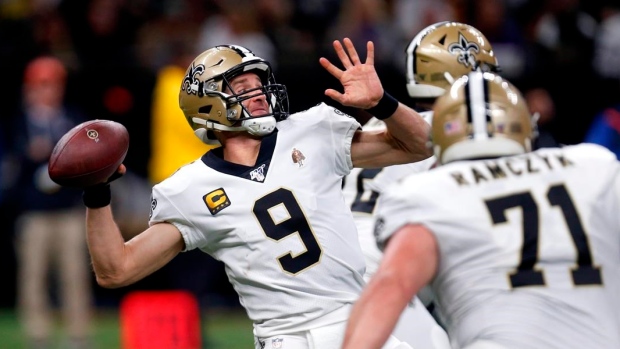 Monday will be a night of celebrations in the NFL.

Not only will Monday Night Football turn 50, but the Las Vegas Raiders are set to unveil their new Sin City stadium against the New Orleans Saints live on TSN.

Both teams enter play fresh off a Week 1 win, and it’s the Saints who are 5.5-point road favorites.

The total currently sits at 48.5, which is down two full points since it opened. A big reason why the under money is pouring in is the injury to Michael Thomas.

The #Saints have ruled star WR Michael Thomas as out vs the #Raiders on MNF. Not a surprise, Thomas is dealing with a high-ankle sprain and didn’t practice this week.

The NFL’s reigning receiving king is out indefinitely with a high ankle sprain, but it’s not as if New Orleans doesn’t have an abundance of secondary talent.

The Saints Offence Will March On

Alvin Kamara will now be featured more than ever, which is promising against this sub-par Raiders defence. Las Vegas surrendered 134 total yards and two touchdowns to Christian McCaffrey last week, and Kamara is fresh off a two-TD performance of his own.

Alvin Kamara is such a swaggy TD scorer pic.twitter.com/UXJmGSAOg4

Emmanuel Sanders will assume the lead receiver duties, with Tre’Quan Smith slotting into the number two role. The last time Smith was elevated to a starting role in primetime, he cooked Washington for 111 yards and two scores.

We should also expect bigger roles for Jared Cook and Taysom Hill. Cook’s matchup in particular is appealing, as the Raiders will be without their starting inside linebacker and Cook has racked up at least 50 yards or a touchdown in 12 straight games.

Las Vegas Crashes Back to Earth

If you’re a Josh Jacobs owner in fantasy I hope you sold high. Jacobs and the Raiders will be significant underdogs in each of their next five games, and four of their next five opponents (New Orleans, New England, Buffalo and Tampa Bay) boasted a top-13 defence in 2019.

New Orleans had a pick-six and three sacks versus Tampa Bay in Week 1, while holding them to just 4.8 yards per play. Derek Carr averaged only 245.4 passing yards per game in 2019, and has cleared 300 yards just once in his past 20 contests.

Pat yourself on the back if you bet under 50.5 when this game opened. As mentioned, the total is now two points lower but under 48.5 still presents value.

The Raiders will have a difficult time finding the paint against the stingy Saints D, and while the New Orleans offence should find success, they historically perform much better on the road than at home.

Last season, the Saints averaged 1.2 fewer yards per play on the road than at home.

In deeper leagues, don’t sleep on Latavius Murray this week as a flex option. Murray earned 15 carries in New Orleans’ Week 1 win, and the Saints will likely lean more run-heavy without Thomas.

As a 5.5-point favorite, game script should be in Murray’s favour and he’ll be the one to rack up rushing attempts when New Orleans is looking to run out the clock.