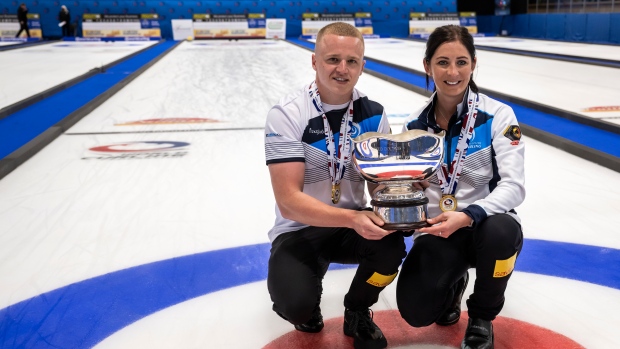 “It feels good. It hasn’t settled in yet, but the week we’ve had here, it felt like we were controlling everything we were doing, so we’re just delighted today," Lammie said after the victory. "We’ve had a world-ride of a season and to cap it off this way — it’s been a memorable season for Scottish curling.”

Scotland jumped out to a 7-2 lead but the Swiss chipped away, at one point reducing the lead to 7-6.

“In mixed doubles, it’s never over till it’s over, and as much as we had that five-point lead you’re always just clinging on," said Muirhead. "One or two half-shots let them back into it. As much as we gave up that big steal of two, we kept our composure, and we knew if we scored it would be good.”

Muirhead has now won gold at the Olympics (2022 Beijing), the World Championships (2013 Riga) and Mixed Doubles, giving her a complete set of titles.

“That’s the complete set of titles for me now, so I don’t know where to go from here. It’s been a phenomenal year and to cap it off with Bobby is really special.”