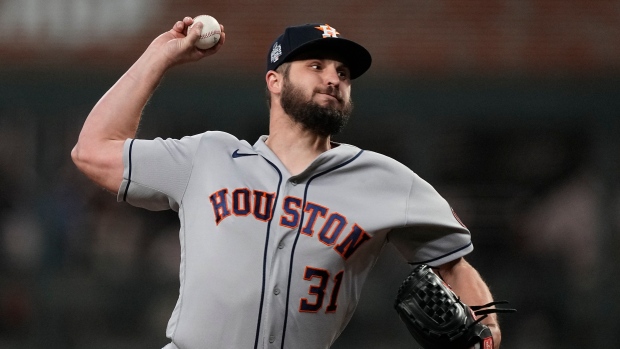 TORONTO — There’s no arguing the fact that the bullpen was the area of the Toronto Blue Jays’ roster that let them down most in 2021.

Bullpens are tricky to build with any sort of certainty at the best of times, and the group of relievers put together last winter by the front office was fraught with more volatility than most.

Overall, the Jays’ bullpen was a middling group from the second month of the season onward, and the bullpen ERA by month shows just that.

From the moment the Kirby Yates gamble blew up in their face in March, you had a feeling it was going to be one of those years.

Luckily for the Jays, the rotation exceeded all expectations and became a strength by mid-season, while the front office did some tinkering just ahead of the all-star break that should continue to impact the club in 2022.

On June 29, the Jays acquired Adam Cimber from the Miami Marlins and the 30-year-old sidearmer went on to post a 1.69 ERA across 39 appearances.

His ability to limit walks — just five in 37.1 innings with the Jays — and give the bullpen a unique drop-down look were important.

Then, on July 6, swapping Rowdy Tellez for right-hander Trevor Richards gave manager Charlie Montoyo another reliable arm to turn to in the second half of the season, as the 28-year-old held opposing hitters to just 16 hits in 32.2 innings.

Only two Jays relievers appeared in 30-plus games post-all-star break: Cimber and Richards.

Ideally, those two will pair with closer Jordan Romano and lefty Tim Mayza, whose comeback from Tommy John was one of the better under-the-radar stories of 2021, to give the Jays a reliable foursome at the back end of the bullpen.

Add in the power arms and upside of Julian Merryweather and Nate Pearson, who will be stretched out as a starter this winter but could ultimately be used in a hybrid role next year as a way to limit his innings, and there’s an interesting mix assembled as a starting point heading into the off-season.

After not investing much in the bullpen in previous winters, this could be the year GM Ross Atkins decides that more impact is needed.

The issue with that, however, is the fact it’s a bit of a barren free-agent market for relief help and the dearth of reliable options may have teams preferring to go the reclamation project route in the same vein as the Yates signing a year ago.

Don’t rule out the trade market being the best way for the Jays to add to this area of the roster, but here’s a look at some free agents that could help.

Combine Romano’s 23-save emergence with the lack of capital-C closer options on this year’s market and it’s hard to envision the Jays doling out the kind of term and loot that it would take to secure Iglesias’ services.

While he likely won’t get the three-year, $54-million deal it took for the Chicago White Sox to lure Liam Hendriks, the top reliever on the market last year, to the south side, it would be a big surprise if the righty with the career 3.06 ERA and 140 saves didn’t get the same term heading into his age-32 campaign.

Iglesias would make even the best bullpens better, but you have to ante up.

The only other true closer types available are Kenley Jansen and Mark Melancon, while the White Sox are expected to pick up Craig Kimbrel’s $16-million option in an effort to trade him.

One of the four pieces sent west to Oakland in the Josh Donaldson trade seven years ago, Graveman has reinvented himself in the bullpen over the past two years.

Since shifting to the ‘pen, the soon-to-be 31-year-old has registered a sparkling 2.17 ERA and allowed just 45 hits across 70.2 frames.

Graveman’s dominance is thanks to his sinker jumping from 93.6 mph as a starter to 96.6 mph in relief, and the pitch he threw 63 per cent of the time this season held batters to a .177 average and a .221 slugging percentage.

He was much better against right-handed batters than lefties this season, but he’s in line for a multi-year deal and the best might be yet to come for the 2013 eighth-round pick of the Jays.

The sinker and ability to keep the ball in the yard — just three homers allowed in relief — would be a huge asset inside the tiny AL East ballparks.

A nice reclamation project find for the Los Angeles Dodgers, Knebel’s 2017 campaign will have teams dreaming this winter.

That year with the Brewers, Knebel saved 39 games and provided a lights-out 1.78 ERA across a whopping 76 innings, before Tommy John surgery intervened.

Knebel finally bounced back this year, posting a 2.45 ERA across a small sample of 25.2 innings, but the stuff looked all the way back as the 29-year-old’s fastball velocity was back up over 96 mph for the first time since 2018.

There’s going to be a ton of interest.

Bradley’s strikeouts have dropped off a cliff since he struck out 27.4 per cent of the hitters he faced back in 2019, falling all the way to 17.9 per cent in his first and likely only season in Philly this year.

But as the 29-year-old righty’s Ks have dropped, his groundball rate has jumped, all the way to a healthy 55.7 per cent this season.

With the dearth of quality relievers available this winter, Bradley could have more interest than initially expected after posting a 3.71 ERA, which is the highest of his career since moving to the bullpen full time in 2017.

The upside here is intriguing for what should be a reasonable price.

One year after I put Kirby Yates in this section, I almost went back to the well.

Yes, even though he disappointed an entire fanbase without even throwing a pitch for the Jays in 2021, Yates will once again be an attractive reclamation project on the market this winter.

Rather than put it off and attempt to rehab the injury — that would have been futile anyway — it’s no coincidence he decided to undergo Tommy John surgery before the season even began, giving him a full 12 months before opening day 2022.

While it’s hard to envision the Jays and Yates agreeing to terms again after that bridge was burned, Rosenthal would be a similar upside play.

If you thought the Yates signing ended up poorly for $5.5 million guaranteed, the A’s paid $11 million for Rosenthal and got the same zero innings from the 31-year-old.

In April, he underwent thoracic outlet surgery, before a hip labrum tear during rehab ended his season in July.

If the medicals check out, Rosenthal will have some team crossing their fingers.