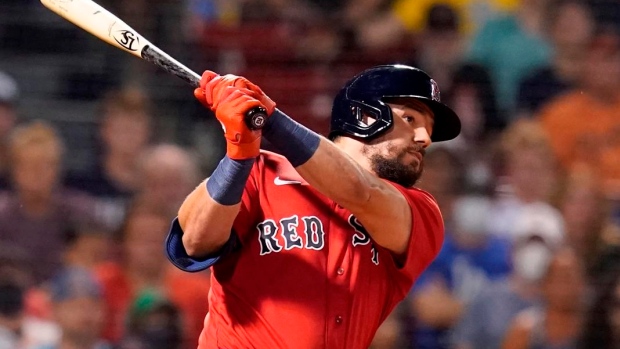 TORONTO — The intriguing part of trying to figure out the Toronto Blue Jays’ 2022 outfield mix isn’t about the potential for addition.

It’s the subtraction that could come along with it.

As the Jays have gone from 95-loss team to contender over the course of the past three years, the front office has mostly refrained from trading roster players, instead using a well-lubricated minor-league pipeline and cold, hard cash to rebuild the roster.

That will change at some point.

If there’s an area of the roster where it could happen this winter, it’s from within the group of four right-handed hitting outfielders.

Obviously, George Springer is entrenched in centre field for the next five seasons, while Teoscar Hernandez has proven to be one of the best run-producing bats in the big leagues since the middle of 2019 and is in line for a huge raise in arbitration this winter from the $4.325 million he earned for his 3.9 fWAR season in 2021.

In the other outfield corner, Lourdes Gurriel Jr. has shown flashes of brilliance and there could be another level, as well.

Then there’s a perfectly capable, albeit overpaid, fourth outfielder in Randal Grichuk.

In a perfect world, the Jays would love to rid themselves of the approximately $20 million owed to Grichuk over the final two years of his contract and replace him with a versatile platoon bat who hits from the left side.

That’s a clear motivation this winter — find a left-handed bat or two that will compliment a righty core of Springer, Hernandez, Bo Bichette and Vladimir Guerrero Jr.

Corey Dickerson filled that role, and he could be a candidate to return, but the Jays will aim higher.

They’ll also investigate that aforementioned trade route, and the names that have come up most often over the past two winters in talks with other clubs are Gurriel and Hernandez.

With good reason. Both are productive, and both are relatively cheap. Especially Gurriel, who is owed just $9.9 million total for 2022 and 2023, with 2024 also a team controlled year via arbitration.

Heading into his age-28 campaign, Gurriel’s name will be on a lot of breakout player lists next spring and he’s sure to attract more trade interest in the coming weeks as the Jays look at their opportunities and alternatives.

By no means do they have to trade Gurriel or even necessarily want to, but it may be one of GM Ross Atkins’ best ways to improve the roster as a whole.

With potential trade dominos in mind and the strong desire to add a left-handed compliment to the outfield group, here are a handful of names that would fit the bill.

Like Marcus Semien and Robbie Ray, the beefy 28-year-old took full advantage of his one-year, $10-million deal with the Washington Nationals, slugging his way to a career year with 32 home runs at a 145 wRC+.

While he’s a one-dimensional player who fits in left field only, there’s no doubting his ability to rake inside American League East ballparks.

A run at Schwarber would mean trading Gurriel and making the outfield defence even worse, but the bat would be a nice fit in the middle of the lineup.

Schwarber, Starling Marte and Nick Castellanos, once he opts out, are the clear top tier when it comes to outfielders this winter.

There’s really no need for the Jays to spend big on another outfielder.

This is the player who could ultimately become this year’s version of Schwarber.

Coming off an ugly platform year with a .232/.344/.384 slash line and just 14 homers across 479 trips to the plate, Conforto will be looking for another kick at the can in free agency next year.

The question is whether the New York Mets will issue the 28 year old a qualifying offer over the next week, which would severely hamper his market.

If he’s free of draft pick compensation, teams will be jumping at the chance to give Conforto a do-over for the same type of deal Schwarber signed a year ago.

He’d be a perfect fit for the Jays, who may need to replace Semien’s prove-it deal production.

Another name to monitor is Tommy Pham. He hits right-handed, so he’s not the cleanest fit in Toronto, but he could be one of the best values on the outfield market in the end.

Rosario cratered in his attempt to rebuild his value, posting a .685 OPS during his first 78 games in Cleveland.

Sent to the Atlanta Braves at the trade deadline for essentially nothing, not only did Rosario play a key role in helping GM Alex Anthopoulos win a World Series, but he also resurrected his free agency case with a .903 OPS in 33 regular season games to finish out the year before winning the NLCS MVP.

Despite the solid showing to finish out the season, Rosario should come at a decent price.

The key here once again is that he hits from the left side.

Pederson didn’t quite enjoy the renaissance Rosario and Jorge Soler did upon joining the Braves, but he did continue to show there’s a lot of juice in his bat when he’s swinging it well.

As a player who’s fine defensively and has a 36-homer season on his resume, a number of teams will be interested in seeing if they can help him put it together with the bat for a full season.

If the Gurriel-Springer-Hernandez group stays intact this winter, Calhoun is a dirt cheap option who might fit the best of any name on this list.

He’s coming off an atrocious 79 wRC+, but he’s by far the best outfield glove on this list and, guess what, he also hits from the left side.

At the age of 34, there’s a chance he’s washed, but the track record of production might be worth gambling on for the price.

Simply bringing back Dickerson would fall into this category, too.