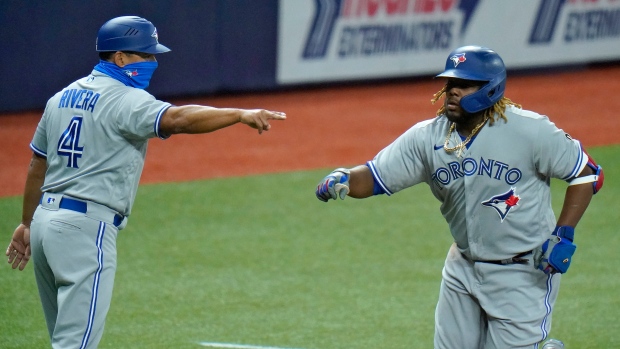 TORONTO — A lot has changed for Vladimir Guerrero Jr. this off-season, but many things have stayed status quo as well.

The aspect that has received the most attention, almost since he arrived in the league in 2019, is once again his body composition.

Embarrassed by the way he showed up to summer camp last July in Toronto, somewhere in the range of 285 pounds, Vladdy Jr. apologized to his Blue Jays teammates right then and there for his poor conditioning, a situation that led to an early move from third base across the diamond to first.

Eight months and a lot of sweat later, Guerrero Jr. sat in front of the media on a Zoom call Wednesday afternoon in Dunedin and said the final count in terms of weight lost from July until now is 42 pounds.

The organization, according to those in the know, gave him a target weight of around 240 pounds, a number they felt was not only realistic for a player of his body type but also ideal in terms of strength and mobility, both in the field and at the plate.

Much has been made of the soon-to-be 22-year-old's conditioning by the media, but routines and work ethic have been something the front office has been concerned about, and trying to instil him with, since he was in the minor leagues.

Simply put, Guerrero hit his way to the big leagues before he could learn how important those things were and his big-league routines took a while to catch up to his bat.

He has learned lessons in his nearly two years as a major leaguer.

“I came here out of shape for a couple years, but it’s in the past,” Guerrero said through team translator Tito Lebron on Wednesday in Dunedin. “One day at my house in Dominican I just sat down and I thought about all this and I decided right then that I was going to get ready, I was going to prepare myself and I was going to work very hard for this year and I did because my main focus was to be ready and help the team win.”

Guerrero’s apology to teammates, especially Bo Bichette and Cavan Biggio, who came up through the minors with him, essentially kickstarted his transformation.

“For the last couple of years, I mean, they knew I was coming here out of shape and I didn’t prepare myself very well and I felt like at that moment my teammates, they needed an apology [from] me,” he recalled. “I just talked to them for a while on that and the good thing about that is they accepted my apology and right then they talked to me, they motivated me, ‘You know what, it’s in the past, start over again getting ready. We know what you’re capable of and let’s move on.’”

While his body looks dramatically slimmed down, two things that haven’t changed much are his position and his swing.

Despite Guerrero’s insistence that he wanted to return to his old position at third base, manager Charlie Montoyo said Wednesday — not unexpectedly for those paying attention — that Vladdy is essentially the team’s primary first baseman heading into the season.
He’ll also get to dabble at third base during spring training, with the idea that he could see a handful of games at third base when injuries, lineup decisions or other circumstances allow for it.

In other words, Guerrero Jr. is a first baseman who could see time at the hot corner in a pinch.

“Ross (Atkins) and I talked to him today: ‘Become a Gold Glove first baseman,’” Montoyo relayed. “Yes, he’s going to play a lot of first base, but he can also play third so I want to see him play third. I haven’t seen him play third in two years, so we don’t want to close the door there.
“My first baseman is Vlad Guerrero and my third baseman is Biggio, but if we’re facing a tough lefty or something and I’m looking to give Biggio a day off, Vladdy can play third.”

As far as his work in the cage this winter, Guerrero said he didn't change much.

Instead of his weight, that means his flyball rate and a diminishing launch angle that some in the organization feel had a lot to do with fatigue are going to be the numbers to watch in 2021.

Hitting the ball hard isn’t a problem for Vladdy, evidenced by his 92.5 mph exit velocity last year, 20th-best in baseball.

But hitting the ball in the air more frequently seems to be the change needed to unlock that massive power that’s paired with an elite hit tool.

Swing changes promoting launch angle were all the rage a half-decade ago. Now, it’s just considered the norm.

Guerrero, however, said he hasn’t tinkered with his swing much. He’s relying on the powerful hack that got him to the show in the first place.

So even with the body changes, the swing will be under the microscope over the next few months as he tries to morph from a productive hitter into the great one that many expect.

Impressive for a young player in a lot of ways, but definitely not meeting the expectations of a No. 1 overall prospect in baseball.

They haven’t met his own high expectations, either.

“I didn’t like last year,” Guerrero said. “I was making some poor swings in good counts, counts in my favour. But then at the end (of the season), I fixed that and I was looking for a good pitch to hit and it really worked at the end.”

It would be foolish to bet against Vladdy heading into his age-22 campaign.

Whether or not the massive breakout is coming this summer remains to be seen, but the organization is confident he has it in him and there’s a minor-league track record and talent base to back up that projection.

“He’s going to end up being, in my opinion, one of the best hitters in baseball, in time,” Montoyo said. “I think just by being in shape, the way he looks right now, he’s going to get there. I don’t want to put that much pressure on him, but I really think that’s what he can do. That’s what we all thought he can do. Now that he looks really good, I think he’s going to have a really good year.”​