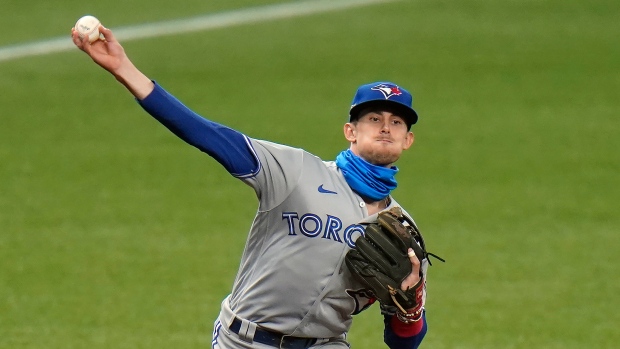 TORONTO — During his three-year journey to the big leagues after being drafted in 2016, Cavan Biggio made just 46 starts at third base.

There wasn’t a whole lot of evidence it was anything other than another way to develop his super-utility profile.

But don’t tell John Schneider that.

As manager of the Double-A New Hampshire Fisher Cats, one he guided to an Eastern League title, Schneider pencilled Biggio’s name in at the hot corner 34 times in 2018, so he’s got by far the biggest sample size of watching the 25-year-old at third base.

So when the time came to configure the 2021 Toronto Blue Jays roster, Schneider was adamant Biggio could handle the position on a near-daily basis.

When the off-season began, it was a contingency plan.

Now, as the Jays get ready to open up their Grapefruit League schedule Sunday against the New York Yankees in Tampa, Biggio is pencilled in as the top option and will see the majority of his work there this spring in order to get him ready.

“Just seeing him do it in the minor leagues and watching him have success with it and continue to get better at it, that was the first part,” Schneider said Thursday of what makes him a believer. “Then the next part is just knowing Cav, the guy and the player, and how he goes about things that are new and challenging. It’s easy to just see him as a second baseman and you kind of watch how his game unfolds there, physically, and then you get to see him do it at third and you kind of go, ‘Oh, wow, that works.’ The arm plays up a little bit and the reactions are good, all that kind of stuff. It’s a combination of watching him do it, albeit at the minor-league level, but just knowing him as a person and as a player.”

Despite the famous last name, when the Jays selected Craig’s kid in the fifth round, 162nd overall, five years ago, he was as under-the-radar as the son of a man in Cooperstown can possibly get.

That didn’t change much through his first two pro seasons.

Then, in 2018, with Schneider as his manager, Biggio exploded thanks to a swing change and a whole lot of figuring things out.

That’s what Biggio does — he finds a way to figure things out.

Whether it’s adding loft and power or identifying pitches out of the hand better than just about anyone in baseball, Biggio’s baseball aptitude has allowed him to overcome a non-elite skillset and become a very valuable major league player.

Figuring out third base, where he had a 10-start cameo last year and made one throwing error, is just next on the list.

“Last year, I was kind of thrown in there and it was just kind of see what I could do there,” Biggio said. “I’m really excited to see how good I can get at that position, and I think what I showed last year is just kind of scratching the surface on what I can do there.

“When it comes to third base, things are a lot more reactionary and I think last year I was trying to rely on my hands a little bit too much versus getting my footwork on cue with that position in general. That’s probably the main focus right now, working on the footwork, getting ground balls and getting my direction going towards third base with the longer throw.”

Even though the arm isn’t elite, Schneider has seen it work.

Figuring out the footwork will take reps. Lots of them.

“The things that are going to be new to him are the non-routine play at that position,” Schneider said. “The ball you’ve gotta come in on, the ball you’ve gotta go to your left or right on. When you look at it from a baseball standpoint, it’s does he have the a) reactions and b) arm strength to make that throw across the diamond? He checks off those boxes, so from there it’s just kind of fine tuning it. He spends a lot of time on his footwork, he spends a lot of time on his throwing program to get himself ready to play over there. Any kind of error or miscue is going to come from lack of reps at that spot, which is why it’s important for him to get a lot of them this spring.”

Here’s a quick look at Biggio’s time at third as a pro:

As one of only two lefty bats of significance — DH/1B Rowdy Tellez is the other — Biggio is an important piece in manager Charlie Montoyo’s lineup and even if he’s not at third, he’s going to be in the lineup almost every day thanks to his versatility.

If the Jays are in the thick of things in July, they could be open to adding a veteran third baseman and sending Biggio back to a valuable super-utility role, where many still envision him settling in.
Whether it’s second base, third, first or the outfield, Biggio is more than capable.

“When you have a guy like that who can help you in so many ways defensively, it just makes your gameplans and your offensive lineup that much more, hopefully, productive and you’re able to put guys in advantageous spots more often with the whole roster, basically,” Schneider said. “It’s a luxury for Charlie, he loves having it work that way and I think it’s just a real credit to Cavan being that guy who says, ‘I’ll go wherever you need me to go.’”

Biggio has bought into the super-utility role for a long time, dating back to a November 2018 interview in the Arizona Fall League.

The everyday second baseman to start 2020, Biggio ended up making 32 starts at the keystone, 10 at third base, three in centre field and 11 in right field last season.

“The beautiful thing about this game is it changes just like that and a couple injuries here and there, I saw my role evolve into way more of a super-utility role which I was prepared for last year, but those are the things I needed to do to help this team,” said Biggio, who’s been working on simplifying his two-strike approach this season in an effort to continue cutting down his strikeouts, a process that already started in 2020 when he dropped his K-rate by nearly six percentage points to 23 per cent. “There’s always a plan at the beginning of the year, but like I said, it’s a long season and things are going to change so communication is the biggest thing for me with where and when I’d be playing a certain position.

“Individually, I mean, in a perfect world, maybe playing second base every day or whatever position it is, I can get really good at it, but I don’t think that value is as high as me moving around for the team and whatever Charlie wants me to do that particular night.”

No matter what position Biggio is playing on any given night or in any given season, his role can be easily defined in one way: Team player.​