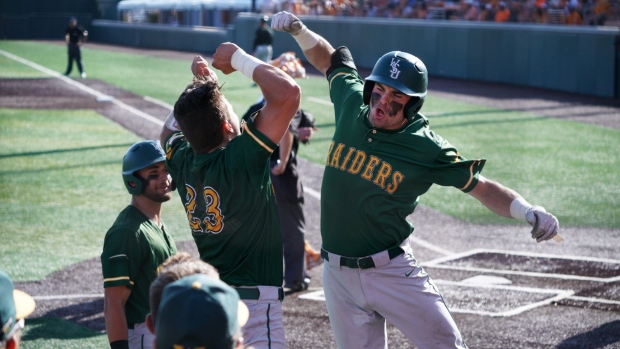 TORONTO — A few years ago, Tyler Black made a decision.

With Sunday’s Major League Baseball draft approaching, there’s zero doubt it ended up being the right one.

It’s a decision every elite athlete is faced with at some point in their formative years, and a decision 99 per cent of Canadians go the opposite way with.

But baseball was calling and spending days at the ballpark with his father, Rod, while the moustachioed legend was a part of TSN’s Blue Jays broadcasts was what did it.

“Being around the ballpark when he worked Jays with TSN, I’d go down to spring training every year and, obviously, I was really young, but it really just threw me into the game,” Black recalled this week. “I played Triple-A hockey until I was 15, but baseball was kind of my first love, even though I was probably better at hockey. Being at the ballpark in Toronto and going to BP and stuff was probably what drew me to the game.

“I knew it would be a difficult path, but I just enjoyed working at baseball, enjoyed the game and enjoyed watching the game. It was kind of a difficult decision at the time, but I guess I made the right one.”

Fast forward half a decade and the soon-to-be 21-year-old Black is on the cusp of hearing his named called by an MLB team after a stellar three-year run at Wright State in Ohio.

Generally considered a second or third rounder, there’s some buzz that Black could even land in the first round.

The bat is the reason.

With a career .353/.468/.612 slash line in his three years as a Raider in Dayton, scouts see a lefty stick who already has a professional plan at the plate.

“He’s a really determined kid,” Sogard said. “He’ll go 3-for-4 in a game and be upset that he didn’t go 4-for-4. That’s just kind of who he is and I think that’s what makes him good — he’s always trying to get better.

“His bat-to-ball skills are so good. He can hit as good as anyone in the country.”

Black knows where his bread is buttered, too.

“I’m a pure hitter, I’d say,” said Black, who had shoulder surgery on his labrum last summer and lost most of his off-season to rehab. “For me, my hit tool is probably my main tool. I take pride in plate discipline and having good at-bats, controlling the zone. I’m starting to tap into my power a little bit and I definitely think it’s something that will be part of my game in the future.”

A career-best 13 homers this year is evidence of that, with Black adding some loft to his swing as a result of mechanical changes.

Defensively, however, there are some questions.

Is he a second baseman? Maybe.

Is he an outfielder? Could be.

It might not matter to some teams because as scouts love to say, hitters hit.

“He still needs to get better defensively and he knows that, but his bat is so good,” Sogard said. “I know some scouts are unsure if he’ll stay in the infield or not, but he’s such a good runner so if [he] ends up going to the outfield, he’ll be just fine.”

If he proves he can stay at the keystone, the two comparisons that have come up most when Black’s name is mentioned are Jason Kipnis and Matt Carpenter, two players who carved out long, productive careers.

Black is used to needing to prove himself and it would have been hard to imagine being a top 100 pick back in the hallways of St. Andrew’s College in Aurora.

“It’s a dream to try and get to the professional level, but in high school I didn’t get a lot of attention, under the radar, I guess,” Black said. “I went to school and I knew I was a really good player, it was just about me showing it on a national scale.”

When Sunday arrives, Black would love to be a first-round pick.

But he’s not getting caught up in draft position.

He also admits he’d love to be a Toronto Blue Jay, but for that to happen they’d either have to spend their first-round pick at No. 19 overall or Black would have to slip to No. 91 in the third round since they forfeited their second-rounder to sign George Springer.

“It’d be a dream come true, but at the same time it’s just a small step,” Black said of potentially being a first-round pick. “It’s just a starting point, regardless of where I go.”

As for the hometown team calling his name, Black isn’t holding his breath.

“I think they’ve talked to my advisor a little bit,” Black said. “I know they have the 19th pick and they have one at 91, so there’s kind of a big gap there. We’ll see, we’ll see.”

Sogard believes the team that drafts Black will be getting a player with a whole lot of untapped potential.

“He hasn’t reached close to his ceiling, in my opinion,” Sogard said.

“I knew his freshman year that he’d have an opportunity to play pro ball and he’s really outworked everyone to put himself in a good position. If you asked me in his freshman year if I thought he’d be a first, second or third rounder? I don’t know. That’s really hard to predict, but he’s really worked to earn that.”​