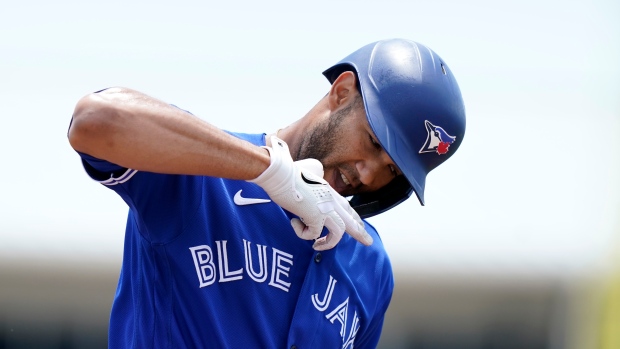 TORONTO — Lourdes Gurriel Jr. has shown he’s capable of putting together epic hot streaks and at times carrying the Toronto Blue Jays offence all by himself.

He’s also shown over the course of his parts of five seasons in the majors that April and May are definitely not his months.

The definition of a slow starter, the 28-year-old Cuban’s monthly career splits are extreme, and that has not changed in 2022.

Searching for the why involved in all of this is mostly futile.

If Gurriel knew what he was doing in September that he doesn’t seem to be able to do in April, he’d change it in an instant.

Is it just reps and at-bats?

Is it the weather?

As he heads into the month of June with a .240/.304/.351 slash output that’s right in line with his career early-season production, Gurriel just grins when the subject comes up because he’s aware of the splits.

“I don’t focus myself on slow starts,” Gurriel said after club translator Tito Lebron relayed the question. “I guess it is what it is, but I guess when it gets warm, I get better. But I’m not thinking if it’s cold that I’m going to have a slow start, that’s not in my mind. I just keep doing the same plan and the same routine.

“It’s getting warmer though.”

Comfort is everything for baseball players, who are creatures of habit and routine, but it’s clear when Gurriel is going well that he’s much more selective at the plate and chasing fewer breaking balls out of the zone.

Since debuting in 2018, Gurriel has been tweaking his pre-game mental routine, and it’s paid dividends.

Gurriel’s seven per cent walk rate so far this season is the best mark of his career, above his career number of 5.6 per cent.

“Just have a plan,” Gurriel said. “Not just for the at-bat, but before the game. Trying to have a plan to make sure mentally that I’m very focused on the pitches that I’m looking for, the ones that I want to swing at. Just being selective.

When Gurriel is locked in, he can be truly scary.

Each and every one of his campaigns has evidence of that.

In the 2020 pandemic-shortened 60-game season, Gurriel claimed an American League player of the week award that September, producing a massive .368/.394/.653 slash line to help carry the Jays into the postseason.

Last year, in what amounted to Gurriel’s first real 162-game grind after his first three seasons were truncated either due to injury or COVID, there were glimpses of more sustained runs, starting with an .873 OPS in the month of June.

Gurriel followed that up by posting a .296/.360/.529 overall slash line in the second half of the season, once again finding himself scorching in September with a .994 OPS and an astounding 30 runs driven in across his final 26 games.

Hitting coach Guillermo Martinez is very aware of his left fielder’s tendency to start slow and heat up with the mercury.

“We definitely make it aware and just finding ways to practice to get him going sooner,” Martinez explained. “It’s been the same thing in the past where he starts slow, but he’s the type of hitter that needs at-bats. I thought in spring training he looked great, but the number of at-bats (due to the shortened spring) kind of messed things up a bit. As of late, he’s trending up in every aspect. He’s taking his walks, exit velocities are improving, his swing is improving, just trending up in all aspects.”

The coaching staff doesn’t leave him alone when he’s locked in.

Quite the opposite, in fact.

They talk to him more, trying to uncover the reasons why.

“Honestly, when he gets locked in, there’s a lot more conversations just to kind of try to figure out where he’s at mentally and physically and then when things are not going well we try to get him back to that mental state with his work, with his thought processes at the plate,” Martinez said.

Last year was a key season for Gurriel, who is only signed through 2023 before he’s scheduled to hit free agency in a year and a half.

Not only did Gurriel figure out how to get himself out of slumps over the course of a long, six-month schedule, he also saw how dangerous he can be when he’s swinging at the right pitches.

“He learned a lot about himself last year,” Martinez said. “In the second half of the season, he made some adjustments at the plate and saw how he turned himself from a four per cent walk rate type of player into, for the last four months, he was like at like 11 or 12 per cent and it was trending up in those months.

“He’s the type of hitter that has very good bat-to-ball skills and he depended on that in the past. Just understanding that he’s a good hitter and people are not going to pitch to him sometimes, so just take your walks. He proved it second half of last year and I think he’s going to do it again.”

With the calendar now flipped over to June, there are already signs it’s happening again, highlighted by a pair of restraint-filled bases loaded walks in the same game against the L.A. Angels last weekend.

“When he gets hot, it’s flaming hot,” Martinez grinned. “Hopefully it starts pretty soon. The weather’s getting warmer so he’s going to start getting hotter.”