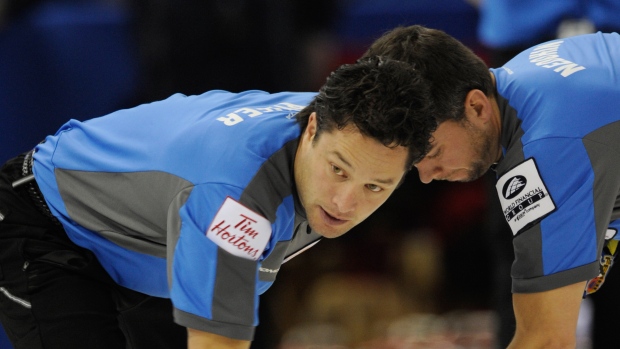 Scott Pfeifer, who won four Brier titles and three world championships as a second for Randy Ferbey in the early 2000s, is the new coach of the Canadian mixed doubles program, Curling Canada announced on Tuesday.

Pfeifer replaces Canadian curling legend Jeff Stoughton, who had served in the role since 2015 and is now the men's national coach and program director. Both Stoughton and Pfeifer will assist each other in their duties going forward.

“I’m honoured to have the opportunity to assist Canada’s top curlers towards their ultimate goal of reaching the top of the podium,” said Pfeifer. “I look forward to continuing the momentum Jeff has created over the past six years in bringing the mixed doubles program to where it is today.”

Gerry Peckham, High Performance Director for Curling Canada, says Pfeifer is a "student of the game."

“I’ve had my eye on Scott’s involvement for 20 years; he was always a student of the game, and has fabulous interpersonal skills, and great credibility among his peer group,” explained Peckham. “He has been part of a High Performance group that includes Jeff Stoughton, Elaine Dagg-Jackson, Renee Sonnenberg, Helen Radford, Adam Kingsbury and Kyle Paquette that I believe puts our athletes in an advantageous position as we move forward to Beijing and beyond."

Pfeifer, 43, has been working with Canada's men's and mixed double programs for the past few years.

John Morris and Kaitlyn Lawes won mixed doubles gold for Canada at the 2018 Winter Games in Pyeongchang, South Korea, the debut of the event at the Olympics.

“I am absolutely honoured and humbled to be named the head coach for a program with such a storied history. I’m excited to continue working with a team of passionate athletes, coaches, and support staff,” said Lizmore. “Specifically, the chance to grow into this role with the guidance and support of Wendy Morgan, Wayne Kiel and Gerry Peckham is an amazing opportunity. The entire team has been a pleasure to work with and the support from Curling Canada, Own the Podium, and Sport Canada has been both steady and immensely helpful during the recent challenging times.”