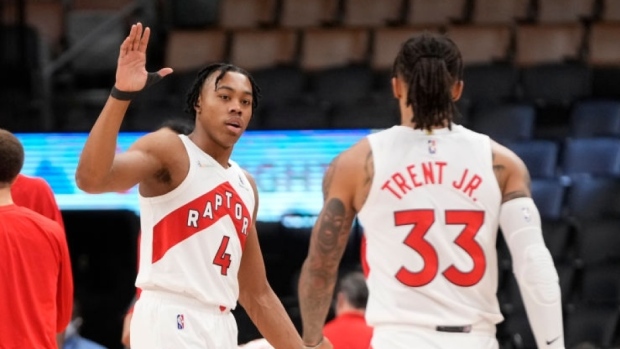 Scottie Barnes returned to practice today, per Nick Nurse. Gary Trent did not. They'll both be with the team on their upcoming road trip, though their status for tomorrow's game in Detroit is still up in the air.

Barnes missed Tuesday's game against the Phoenix Suns because of a right knee injury, while Trent (ankle) has missed Toronto's last two contests.

Nurse said that both players will be with the Raptors for their upcoming five-game road trip and added their status for Friday's game against the Detroit Pistons is up in the air with the duo officially being listed as questionable.

Barnes, the fourth overall pick in last summer's NBA Draft, is enjoying an impressive first season in the NBA. The Florida State product is averaging 14.7 points and 8.0 rebounds on 48.2 per cent shooting in 33 games.

Trent is in his second season with the Raptors since being acquired from the Portland Trail Blazers in a deal involving Norman Powell last year. Trent is averaging 16.4 points per game on 42.1 per cent shooting.

After their matchup with the Pistons on Friday, Toronto will head to Milwaukee to take on the defending champion Bucks Saturday night.