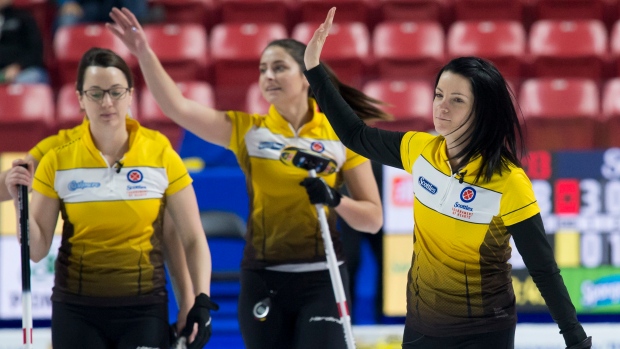 That was the common sentiment among curlers in Moose Jaw this week after Curling Canada announced in December the Scotties Tournament of Hearts would have the same purse as the Tim Hortons Brier for the first time in history.

“It’s 2020 and we think it’s time to have equal pay across our sport. It’s really come a long way. When I started played in the Grand Slams and the Scotties there were only a couple of events that were televised for woman,” Ontario lead Lisa Weagle told TSN.ca earlier this week. “We’ve come such a long way throughout the sport so it’s really nice to see that the pay is equal across the board.”

Weagle and St. John’s skip Brad Gushue were just two of the many pro curlers that worked alongside Curling Canada CEO Kathy Henderson to make sure the women’s prize money got a much-needed raise for the Moose Jaw Scotties and beyond.

Other Curling Canada events like the Continental Cup and Canada Cup have had identical purses since their debuts in 2002 and 2003, respectively. It was time for national championships to get on board as well.

“I wish they would pay it out retroactively,” said Team Canada skip Chelsea Carey. “It’s been a long time coming. We have pay equity at the Grand Slam series and so I think that set a bit of precedent.”

Over the past couple years, a lot of behind-the-scenes work including player meetings and informal discussions were needed to make it to this point.

Alberta skip Laura Walker made her Scotties debut this year and is appreciative of the how hard Weagle, Gushue and other players from both the Scotties and Brier worked to make pay equity happen at the Canadian championships.

“Without that our sport just dies and the players don’t have a voice, so we are all really appreciative for the players that do that,” said Walker.

“I was really proud of the players that came together to fight that a little bit and a lot of the players on that board were men. So, I think that was really important to have both sides speaking for the fact that we knew we needed equality there. Obviously real excited for it, but just surprised it took this long.”

A major factor in reaching pay equity at the Brier and Scotties was Henderson, who made it one of her first goals after taking over as CEO of Curling Canada in early 2016.

“It really didn’t take that long once Kathy [Henderson] got behind it. It was immediate for her. It was just a matter of her having to work behind the scenes with her stakeholders to make sure this was going to happen,” explained Weagle.

Despite the step in the right direction, Walker says there still could be improvements at both the Scotties and Brier when it comes to sponsors, a key factor for many curlers who compete full time. Currently, curlers are not allowed to wear or mention sponsors during the Scotties Tournament of Hearts and Tim Hortons Brier.

“We don’t curl without our sponsors and we don’t even get to mention them while we’re here [national championships]. So that’s something that I know we would like to keep moving forward,” said Walker. “We’re lucky now that we can do it at the Canada Cup, something we weren’t always able to do. It’s slowly getting there, but that’s just such a big thing for us. We don’t play without those sponsors and we would love to be able to recognize them a little bit more.”