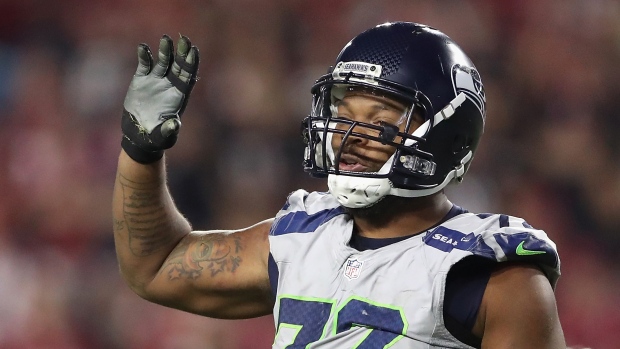 RENTON, Wash. — The Seattle Seahawks will be without standout defensive end Michael Bennett for Sunday's game at New Orleans and possibly longer.

Seattle coach Pete Carroll said Friday that Bennett is dealing with the cartilage issue in his right knee and the end result could be surgery. Carroll said a decision on Bennett's treatment will likely come early next week.

"We're going to check him on Monday and see if there's something we can do for him," Carroll said. "His knee bothered him after the game coming out so we're going to take care of him."

Bennett missing his first game with Seattle topped a lengthy list of unfavourable injury news for the Seahawks. Safety Kam Chancellor will miss his third straight game with a groin muscle injury that Carroll called "substantial" with no timeframe on when he might return.

Bennett has not missed a game since 2011 when he was playing for Tampa Bay. He played 81 snaps in last week's 6-6 tie with Arizona but suffered a right knee injury in the second half of Seattle's win over Atlanta two weeks ago. The injury wasn't deemed serious and Bennett was able to play without limitations against the Cardinals.

Carroll said Bennett had swelling in the knee early this week and "there was a little something we found" after Bennett had an MRI.

"He came out of the game feeling like there was something going on. He had a little swelling on Monday and Tuesday after the game and so that's when we took a look at it and wanted to make sure we knew what was going on," Carroll said.

Seattle initially ruled out left tackle Bradley Sowell after he suffered a sprained MCL in his right knee last week. But Carroll said Sowell will be worked out during pregame on Sunday, at which time a decision would be made.

"George finished the game last week, and that's a likely move for us to go with. We've got some other choices like I told you, and we're not ruling out Brad at this point," Carroll said. "I don't know how he did that that fast, but he did, and he looks like he's ready to compete for it. And he'll try to show us on game day that he's ready to go."

Quarterback Russell Wilson was not on the final injury report, meaning he's expected to start. Wilson has been limited this week by a pectoral injury.