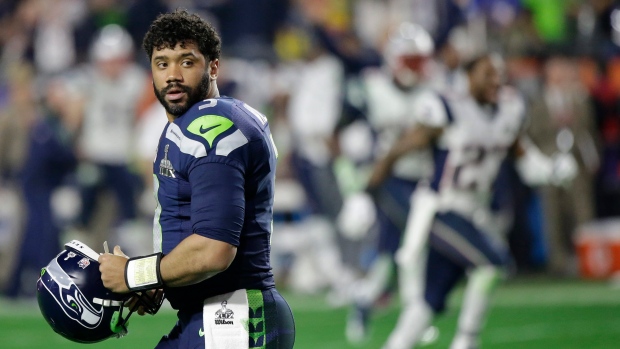 RENTON, Wash. - Before the Seattle Seahawks try to construct another championship team, they need some mental healing in the off-season.

For many, that means getting as far away from football as possible after playing more games than any other NFL team over the past two seasons.

"Pete (Carroll) talked to us and told us we need to take time away, not only to rest our bodies, but also rest our minds," wide receiver Doug Baldwin said. "The mental toll this season has had on us, the two very long seasons and the mental toll of this game, your body has to recover from it. So we have to take time away and we enjoy our families and enjoy the things that are important in our lives and get past this."

Getting over the sting of Seattle's 28-24 Super Bowl loss to New England after a last-minute Patriots pick won't just happen in the off-season. It probably won't really be clear where the Seahawks are until the start of the 2015 season, when Seattle's drive to reach a third straight Super Bowl will begin.

Structurally, the Seahawks will have a different roster come September. Most of Seattle's core is locked up for at least a few more years but there are some key decisions the Seahawks must make.

Here are some issues the Seahawks will need to address in the off-season:

BEAST MODE: It's been a lingering question since his brief holdout last summer: What happens with Marshawn Lynch in 2015?

Lynch is due $7 million in the final year of his contract with the Seahawks with an $8.5 million salary cap hit. It's a significant number for a running back who will be 29 years old when the next season begins.

But after rushing for 1,306 yards in the regular season and at least 100 yards in two of three post-season games, it's hard to imagine Lynch not being with the Seahawks next season.

A glimmer of hope for Seahawks fans: coach Pete Carroll said on his radio show this week that talks have been ongoing about a new, restructured deal for Lynch.

PAYING RUSSELL: The question isn't so much whether Seattle will pay Russell Wilson. That's a certainty. How Wilson's expected contract extension is structured and how it impacts Seattle's salary cap is the real question.

After years of getting lucky with key contributors playing on their rookie contracts, the Seahawks are now hitting the point where all their stars will be getting significant pay bumps. Strong safety Kam Chancellor, cornerback Richard Sherman, safety Earl Thomas, defensive ends Michael Bennett and Cliff Avril, linebacker K.J. Wright and Baldwin have all gotten paid.

The way Wilson's contract fits within those deals will be critical to how the Seahawks supplement the core of their roster.

WHAT ABOUT MAX?: Byron Maxwell is the unsung guy in Seattle's secondary, the fourth member of the "Legion of Boom."

He's about to get paid.

Maxwell is one of the few unrestricted free agents for Seattle. Because of his success playing in Seattle's secondary and the scarcity of quality cornerbacks, Maxwell is likely to get healthy offers on the free agent market. Will Seattle be able to counter what Maxwell is offered? It might be tough with other contracts for the Seahawks to handle.

CALL A CARPENTER: The Seahawks have a major decision to make on their offensive line with guard James Carpenter. Seattle declined to pick up the fifth-year option on Carpenter before last season, but he played well enough in 2014 to deserve consideration as the starter going forward if Seattle wants him back.

Carpenter and Maxwell are the only full-time starters for Seattle who will be unrestricted free agents.

GET HEALTHY: Most of Seattle's vaunted secondary was headed for off-season surgery. Thomas and nickel cornerback Jeremy Lane are both set for surgery — Thomas on his shoulder and Lane on his arm. Sherman appears headed for a procedure to repair ligament damage in his elbow and Chancellor may need surgery on his knee. None of those should linger into the start of the regular season but all four may miss part of the Seahawks' off-season program.