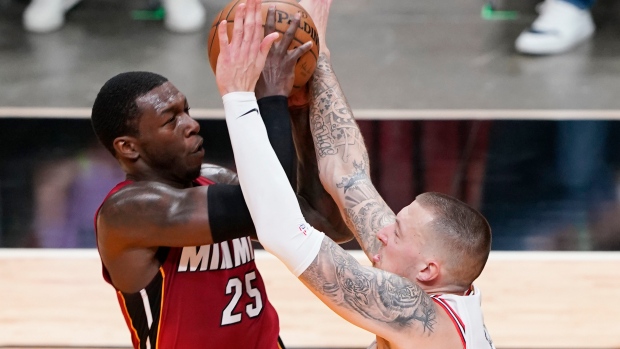 Injuries continue to be the story of fantasy basketball this season, with several top-performing players going in and out of lineups across the NBA.

Pay attention to your waiver wire to see if any blue-chip players have been dropped but are returning earlier than anticipated.

The Trae Young manager in your league must’ve panicked and dropped him for a healthy player.

Collin Sexton has missed three games in a row healing from a concussion.

Maybe you can time it just right to get LaMelo Ball back for a game or two.

While there might be a big star out there for you to scoop up, here are 10 healthy players to consider in 10-team and 14-team leagues.

Last week, the assist options were slim so I recommended Nunn. He rewarded managers with just four assists over the weekend but gave you 43 points, shooting 50 per cent or better in both games.

Returning from a one-game absence, Nunn got back in the starting five Wednesday night, dropping 18 points and should continue to be a steady source of offence while Victor Oladipo remains sidelined.

Finney-Smith has emerged as a candidate for best waiver add of the fantasy playoffs. Over the past month he’s sitting just outside the top 50 in nine-cat leagues and providing an extremely roto-friendly stat line.

While he’s never profiled as a three-point specialist, DFS is red-hot and should be on your radar. Over the past two weeks, he’s averaging 3.3 threes a night (21st in the NBA) on an absurd 56 per cent clip and has made the most of his limited shot opportunities.

Kristaps Porzingis has missed the first two games this week, so consider it a bonus if he remains sidelined for the weekend.

There’s a decent chance ‘Time Lord’ is floating in your league’s free agency pool having missed seven games in a row. He returned to action Wednesday night, coming off the bench and getting his managers nine boards in just 16 minutes.

Regardless of whether Tristan Thompson reverts back to the bench, Boston will likely get Williams roughly 22 to 28 minutes a night. As a per-36 animal, that’s more than enough playing time for him to get you a potential double-double with some defensive stats.

After missing last Saturday’s contest with a lower back injury, Dragic has returned to Miami’s lineup by dropping back-to-back seven-assist performances.

Nunn’s return on Wednesday pushed Dragic back to the bench but with Tyler Herro still questionable, the Slovenian played 28 minutes and facilitated the Heat offence as he often does.

He’s averaged 4.7 assists over the past two weeks, the most out of any player rostered in under 50 per cent of ESPN leagues with two games this weekend.

I’m very excited to see how Okeke will fit with Jonathan Isaac next season. With the way Okeke has been clamping down on defence recently, they could evolve into one of the NBA’s toughest wing tandems to play against.

Okeke is really coming into his own over the past two weeks, averaging 2.3 steals in just under 30 minutes a night. He’s not just a one-trick pony either; over the last month, he’s be a top-80 nine-cat player.

In this tanking season, one would hope Orlando continues to prioritize his development and get his minutes into the 30s.

There are several great block streamers this weekend who I could’ve featured instead. Khem Birch and Mo Bamba are two of the top alternatives with two games this weekend.

I recommended Gafford last week and he stepped up, grabbing five blocks (one of those games dropping four steals and four blocks).

Compared to the two options above, Gafford plays the fewest minutes and is coming off a zero- steal, zero-block performance, but I still think he’s got the highest upside of the bunch.

Birch is guaranteed the most minutes, but the Lakers and Jazz both rank in the bottom 10 of opponent blocks allowed. Bamba falls somewhere in the middle – second in minutes and second easiest opponents for blocks.

It comes down to your risk profile in elimination week. If you’re already leading in blocks, Birch has a high floor and will likely get you a minimum two blocks. If you need a big swing to flip the category, go with Gafford.