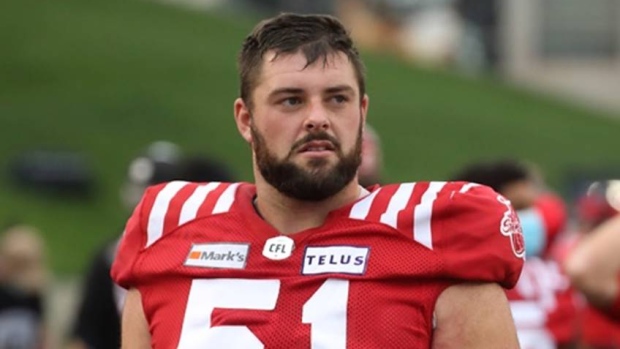 The Calgary Stampeders have re-signed Canadian offensive lineman Sean McEwen to a two-year contract extension that will keep him with the club through 2023.

The 2021 CFL All-Star centre was slated to become a free agent next month before the deal was announced Wednesday.

The University of Calgary standout started all 14 games for the Stamps last season, his first in Calgary after spending his first four years with the Toronto Argonauts. Calgary's offensive line allowed the second fewest sacks in the league and paved the way for Ka'Deem Carey, who led all CFL running backs in rushing and rushing touchdowns.

“Sean provided strength, stability and leadership during his first season as a Stampeder and he performed at an all-star calibre,” said Stampeders president and general manager John Hufnagel in a news release. “I’m very pleased he has made this commitment to the team and his presence goes a long way towards solidifying our offensive line.”

“I’m so excited to continue to be a part of the Stampeder family,” said McEwen in the same release. “This organization knows what it takes to win and we want nothing more than to bring this great city a championship.”