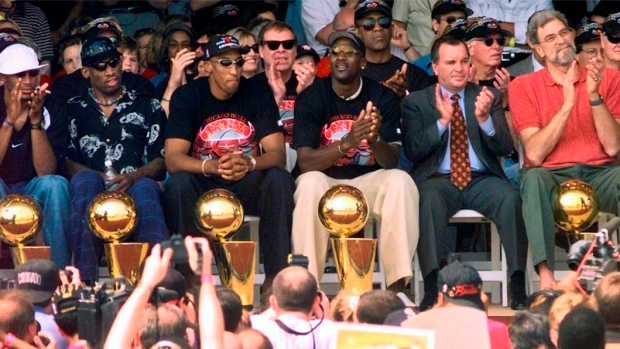 Like everything in Michael Jordan’s orbit, The Last Dance  – a 10-part documentary series that concluded on ESPN and Netflix last week – was iconic and memorable. If not for the fact that it was virtually the only fresh sports content available during a global pandemic, then because it gave us incredible insight into one of the most dominant athletes of all time.

One part of the series that really stood out were the middle episodes that focused on Jordan’s famous sidekick, Scottie Pippen. Jordan and Pippen are perhaps the most legendary duo in sports, the core underpinning Chicago’s six titles from 1991-98.

Like Jordan, Pippen was an electric two-way player who could beat you on both sides of the floor. When the two were on the court together, they outscored opponents at a disproportionate rate. Relative to their 1990s peers, Jordan and Pippen ranked first and seventh respectively in Box Plus/Minus.

Reliving the duo’s dominance made me wonder which NHL player combinations over the past decade might be comparable. No duo has even come close to winning that amount of team hardware over the period – in large part because parity in hockey is omnipresent, and it’s much less a star-driven league than the NBA. But we do know of a number of player combinations that drove similarly disproportionate differentials against the opposition.

Let’s try to find some comparables for the Jordan/Pippen combination. First, we will focus on the player combinations that drove the most disproportionate goal differentials together over the past decade. Then we will look at the best single season net goal differential, searching for the magic Jordan and Pippen recreated during the 1995-96 regular season.

First, the full decade. I wanted to isolate on the combinations that we saw extensively, and the 4,000-minute cutoff (leaving us with 29 pairings) seemed the most appropriate. None of these combinations should surprise: 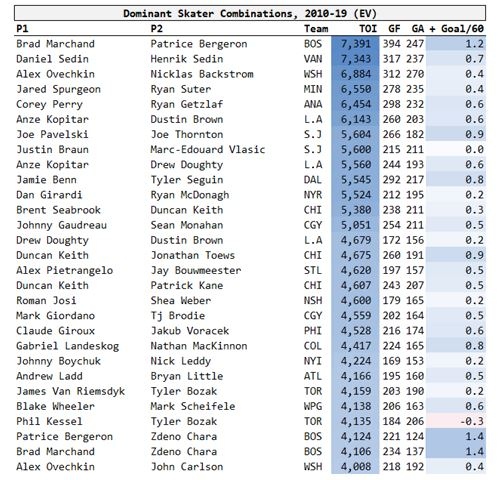 If you were solely looking at ice time, the longevity of two combinations – Brad Marchand and Patrice Bergeron in Boston, and the Sedin twins in Vancouver – would get first consideration.

Those duos are the only two members of the 7,000-minute club, and with both of Boston’s premier forwards signed through at least 2021-22, they still have a good chance at building on their legacy. What is particularly incredible about these two combinations is they maintained outrageous goal differentials over nearly a full decade, aging curves be damned. Over thousands of minutes, both were about a full goal better than their opponents for every 60 minutes of even-strength hockey. That is incredible!

Of course, this first pass weighs longevity rather heavily. What about players who played less together for any variety of reasons, and were able to carry more impressive goal differentials than either of the above?

Consider the Boston duo of Marchand and Bergeron for one moment. If we looked at their net goal differentials when one of those forwards were playing with legendary defenceman Zdeno Chara, those numbers improve – in fact, none of the combinations posted better net-goal differentials than the likes of Marchand/Chara and Bergeron/Chara, who outscored their opponents by about 1.4 goals per 60 minutes this decade.

The caveat here is obvious: Marchand and Bergeron rarely play apart from one another, so when you bring Chara into the fold, you really are looking at the net goal differentials of all three skaters together. As a trio, there is no doubt this was the most dominant group in the league, and they have a Stanley Cup to boot.

The best non-Boston combination over the years? That honour belongs to Joe Pavelski and Joe Thornton, who put together an all-time run in San Jose. Pavelski and Thornton were about one goal better than their opponents per 60 minutes, and that discounts the magic they were able to create on the power play over the years.

Let’s look at this in two other ways. What if we drop the ice time restriction and bring in players with, say, 2,000 minutes together? 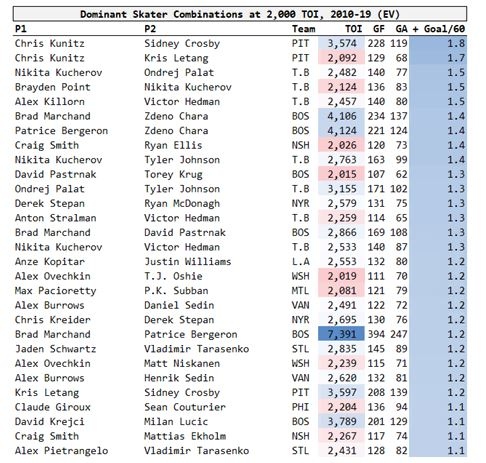 One thing that’s obvious is once you minimize the effect of longevity, teams with very strong peaks – the Pittsburgh Penguins and Tampa Bay Lightning being the most obvious – see a number of player combinations added.

No combination drove better goal differentials this decade than Pittsburgh’s Chris Kunitz and Sidney Crosby, who were a whopping 1.8 goals per 60 minutes better than their opponents. And, I cannot emphasize this enough: at their peak, they probably were the most unstoppable offensive force in the league. That’s 3.8 goals scored per 60 minutes for years upon years! If you had to pick one pairing to match-up against any Boston combination, it probably would be these two.

Lastly, what about the best single season? This data gets noisier to be sure, so let’s make sure the combinations were regular – minimum 500 minutes. 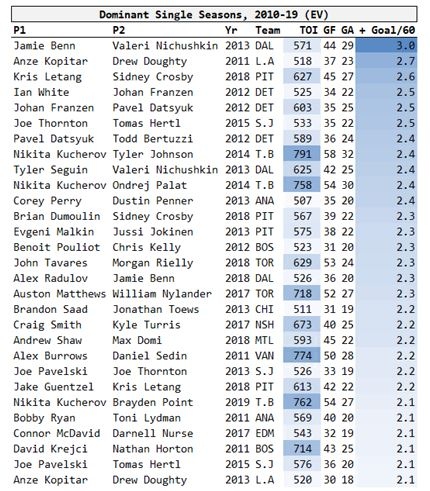 If you had Jamie Benn and Valeri Nichushkin as the best single-season combination of the decade, raise your hand. If your hand is raised, you are either a Dallas Stars fan or are lying! I did find it interesting that only one combination from the 2019-20 regular season made this list – that honour belonging to Nikita Kucherov and Brayden Point, who put together a pretty outrageous +2.1 goals per 60 minutes split this season in Tampa Bay.

If we learned one thing from The Last Dance, it’s that even superstars of the highest order benefit from playing with great teammates. Bergeron isn’t the same without his defensive anchor or winger pest; the Sedin brothers’ story isn’t the same if they aren’t identical twins with incredible two-way skill sets, and so on.

Finding dominant player combinations in hockey over multiple years is quite hard, but perhaps that’s what makes what we have seen in Boston (plus Vancouver, Pittsburgh, Los Angeles and Chicago) even more admirable.