Should the Kraken select Price in the expansion draft?

TSN Director of Scouting Craig Button joins host Gino Reda to discuss whether or not the Seattle Kraken should take Carey Price in the expansion draft, who he’d look at on the blue line and up front in addition to his thoughts on Kyle Dubas’ decision to acquire Jared McCann and what it could mean for Alex Kerfoot.

Should the Kraken take Carey Price?

Button: Lots of good reasons to select Carey Price, but I’m not selecting him. I would say the price is not right. Let’s first look at Carey the goaltender. He’s been hampered by injuries in previous seasons and now, he’s going to examine some ailments that may prevent him from being able to play at that level going forward. Then you add in the contract price. Five more years at a $10.5 million cap hit. I’m staying away.

If not Price, then who?

Button: Starting with Washington’s Vitek Vanecek. Superb showing as a rookie in the National Hockey League and when you can show that aptitude and you look at his age, he’s No. 1 on that list of selections. But, you want some support from him. And I’m looking at the UFA in Florida Chris Driedger. Yes, you’re going to have to get him signed but his emergence this year, the confidence that Joel Quenneville had in him, if Ron Francis can get him signed, that would be a nice duo to start the season. 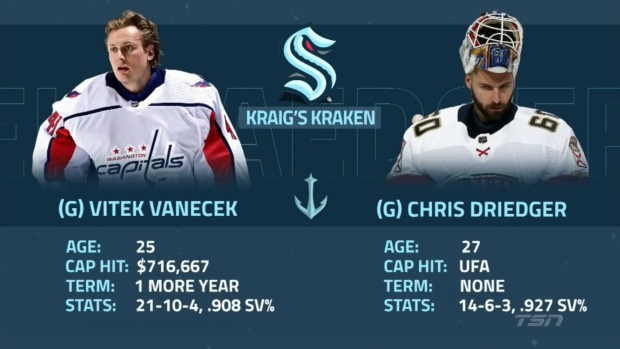 What about on the blue line?

Button: Well it starts with Calgary Flames captain Mark Giordano. He has one year left on his contract. He’s still a very capable player and he’s going to help the Seattle Kraken on the ice, but more than that, come the trade deadline, he’s going to have a lot of attention put to him because of his capabilities. When you look at David Savard going to the Tampa Bay Lightning for a first-round draft pick, you know Mark Giordano can have that type of a return in a trade at the deadline. Also, the Philadelphia Flyers situation is interesting because former Flyers head coach David Hakstol is the head coach in Seattle. I have them taking Robert Hagg because he’s a player with a little less salary but could fit. But, Hakstol knows Shayne Gostisbehere, he also knows Jakub Voracek. And when you look at goal scoring, there’s a lot of opportunities to explore the Philadelphia Flyers’ exposed list. David Hakstol knows those players very well. 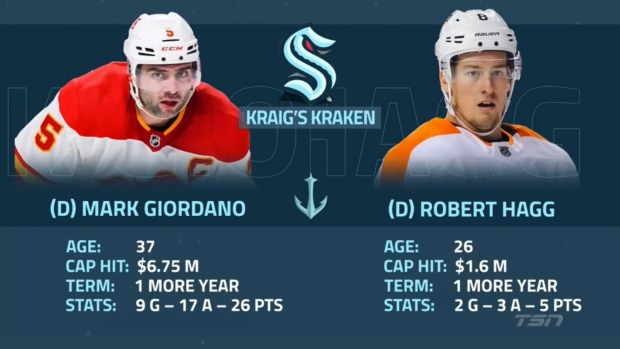 And what about up front?

Button: It starts with Ondrej Palat with the Tampa Bay Lightning. The Seattle Kraken sit in a real comfortable spot. They can say ‘Hey listen. You want to keep Ondrej Palat? We need Mathieu Joseph. Or we need Yanni Gourde. Or we need Alex Killorn. Or we need all three of those guys.’ Because the Tampa Bay Lightning are going to have to shed salary. So Ron Francis can sit in Seattle and really exact a price out of the Tampa Bay Lightning. Or, if he doesn’t get it, he’s got Ondrej Palat sitting right there and he can maximize the value of him at a trade deadline transaction. Also, St. Louis Blues Vladimir Tarasenko. Two years left on his contract. We know he’s been a proven goal-scorer. But we also know that he’s coming off of two shoulder surgeries. He’s another player that can help you down the road where teams may be looking for a goal-scorer and if Tarasenko can show that form once again, he’s going to have a lot of value.” 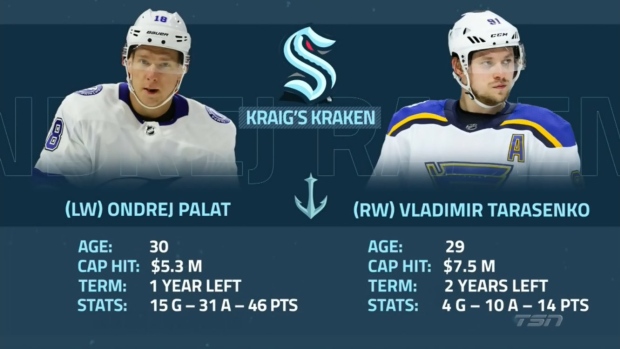 How do the Leafs factor in to all this?

Button: Well, Kyle Dubas acquired Jared McCann just prior to the deadline for making trades and putting in your protected list. Toronto went with the eight skaters, one goaltender protection scheme. And so that left Alex Kerfoot available. And the pre-emptive move by Kyle Dubas was saying ‘Okay, it looks like I’m going to lose Alex Kerfoot, so I’m going to acquire that replacement, Jared McCann, so I’m not left short.’ What I have to believe is that he looked at what it was going to cost him to keep Alex Kerfoot and he said the price was less to get Jared McCann. And now it’s left to Seattle to pick one or the other. Looks like Kerfoot from my view, but a real nice move by Kyle Dubas. 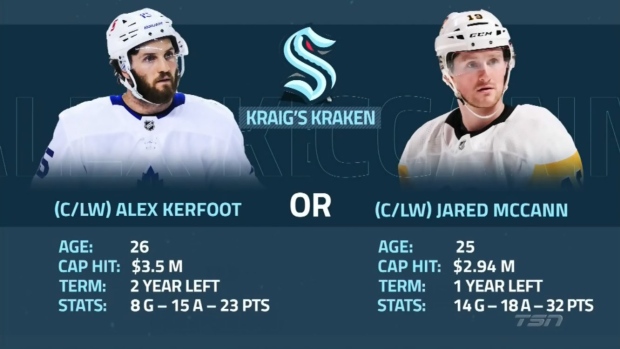