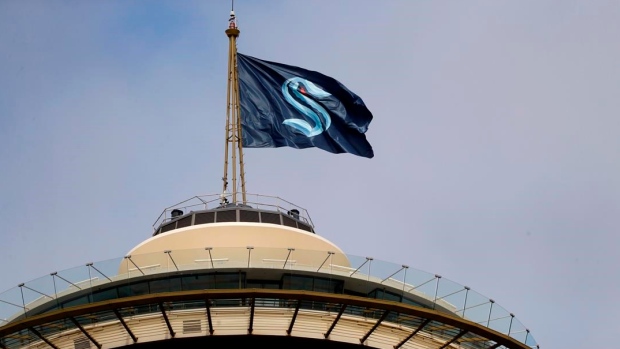 The Seattle Kraken will take the ice for the first time in Spokane for their exhibition opener, with the NHL expansion franchise touring around the state of Washington while their arena renovation is completed.

The Kraken announced Friday they will play home preseason games against the Canucks in Spokane on Sept. 26, the Oilers in Everett on Oct. 1 and the Flames in Kent on Oct. 2.

CEO Tod Leiweke said Climate Pledge Arena is “on track” to host the Kraken's first home game of their inaugural season in mid-October.

"This gives us an opportunity to partner with (Western Hockey League junior) teams, celebrate hockey across our region and grow this beautiful game," Leiweke said. "We couldn’t be more excited for these games and then to open Climate Pledge Arena.”

It's an arrangement similar to what the New York Islanders are doing while their new arena is being built. The Islanders are playing their home exhibition games in Bridgeport, Connecticut, the home of their American Hockey League affiliate, though they also may need to open the regular season on the road with UBS Arena at Belmont Park scheduled to open in November.

The Kraken are scheduled to play six total preseason games, going on the road to Edmonton on Sept. 28, Calgary on Sept. 29 and Vancouver on Oct. 5.

“These games represent the opportunity to see our roster come together for the first time outside of training camp," general manager Ron Francis said.

After no preseason leading up to the condensed 56-game 2021 season, Deputy Commissioner Bill Daly confirmed the NHL is going back to what's written in the collective bargaining agreement in allowing each of the now 32 teams to play six to eight preseason games.

The Kraken introduced Dave Hakstol as their first coach on June 24. They'll reveal their first 30 active players at the expansion draft in Seattle on July 21 and have the No. 2 pick in the entry draft two days later.