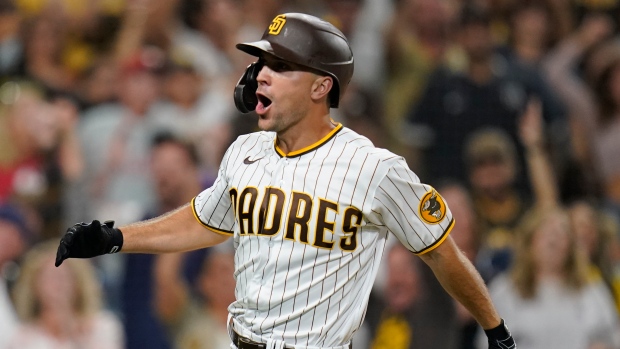 The move cost Seattle two minor leaguers, but it addresses one of the team's biggest needs entering the offseason; adding a middle infielder to pair with shortstop J.P. Crawford. Frazier’s versatility means the Mariners can still be aggressive with other possible transactions should another middle infielder become available.

“Adam is a proven, versatile and well-rounded player,” Seattle general manager Jerry Dipoto said in a statement. “His presence makes our lineup longer and our team more complete.”

Rosier was a 12th-round pick in the 2021 amateur draft out of UNC Greensboro. He spent last season at Single-A Modesto.

Frazier got off to a fast start last season with Pittsburgh, batting .324 with an .836 OPS and 28 doubles in 98 games. He was traded to San Diego in late July and faded over the final two months of the season. In 57 games with the Padres, Frazer batted .267.

But Frazier puts the ball in play, having never struck out more than 75 times in a season and should help lengthen Seattle’s batting order.

Defensively, Frazier has primarily played second base or left field throughout his career. Should the Mariners plug Frazier in at second, it would give them the ability to move Abraham Toro, acquired last year from Houston before the trade deadline, to his natural position of third base.