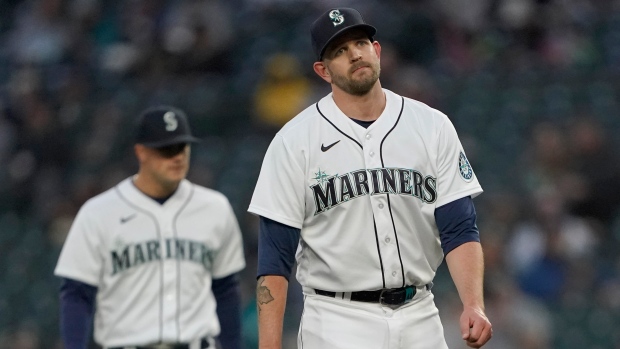 SEATTLE — Left-hander James Paxton exited the first start of his second stint with Seattle due to a forearm strain in his pitching arm after throwing just 24 pitches against the White Sox on Tuesday night.

The Mariners initially said Paxton had elbow discomfort but after the 10-4 loss to Chicago both manager Scott Servais and Paxton described it as a forearm injury.

Paxton, who remained in the dugout to watch after he left the mound, will undergo an MRI on Wednesday.

“It's just frustrating. I feel like for me it’s kind of been one thing after another,” Paxton said. “I work really hard and doing everything I can to be out there and I’ll continue to do so. And hopefully I can catch a break and stay healthy.”

Paxton grimaced after throwing a 92 mph fastball to Chicago's Andrew Vaughn with one out in the second inning. Mariners manager Scott Servais and a trainer immediately came to the mound while Paxton bent over with his hands on his knees. After some discussion, Paxton walked off and was replaced by Nick Margevicius.

“I kind of felt it coming on and then by the time that third hitter came up it just got worse and worse and just kind of felt it,” Paxton said. “It got to the point where I couldn’t throw pitches.”

Paxton, who spent the last two seasons with the New York Yankees after playing his first six years for Seattle, returned to the Mariners in February on a one-year deal worth $8.5 million. Paxton can earn an additional $1.5 million in performance bonuses for games started: $150,000 each for six to 10 and $750,000 more over starts 11-22.

He had surgery in February 2020 to repair a herniated disk and remove a cyst from his back. He went 2-3 with a 6.64 ERA in five starts for New York last year before being shut down with a left forearm flexor strain.

Paxton said this issue with his forearm feels different than what he dealt with last year. He said there was more pain a year ago, which has him optimistic this could be less serious than initially feared.

Paxton said the off-season was a progression of building up strength in the forearm in the hope of putting the problem behind him.

“I came into tonight I was pretty confident that I was going to be good, but it turned out that it just was a little too much for what my flexor was ready for, I guess,” Paxton said.