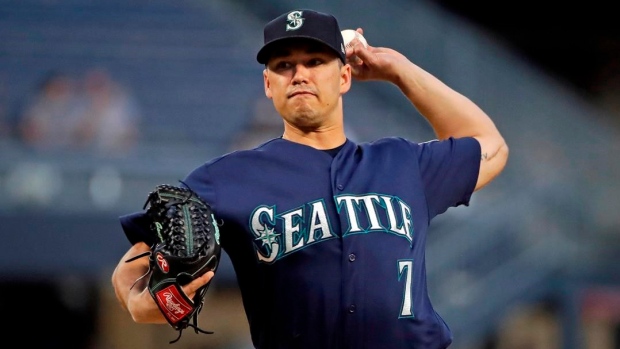 PEORIA, Ariz. — For Marco Gonzales, better that this game came in his first start of spring training and not opening day at T-Mobile Park.

The Seattle Mariners left-hander gave up five runs on three hits while getting just two outs Monday against the Chicago Cubs.

“You go out in the first one, you just want to throw strikes. Timing was a little off and frustrated a little bit by my execution. But for the first time out, I wanted to feel good and have the ball feel good coming out got my hand,” Gonzales said. “So the results are what they are this time of year.”

Gonzales, fresh off a four-year, $30 million contract he signed earlier this month, is expected to make his second consecutive opening day start for Seattle next month. At age 28, he’s coming off a 2019 season in which we he went 16-13 with a 3.99 ERA in 34 starts.

Gonzales, who will make $1 million in this his third season with the Mariners, set career highs in wins, starts, innings pitched (203) and strikeouts with 147.

The 34 starts were tied for the most in the AL with three other pitchers, including Cy Young Award winner Justin Verlander of the Houston Astros. Only one left-handed pitcher in the majors has more starts than the 63 for Gonzales since 2018 — Patrick Corbin of Washington Nationals.

Gonzales said the contract sends the message that the Mariners believe in his work ethic and who he is as a person.

“For me, I can’t put too much on my shoulders other than just being myself,” he said. “I felt like last year I went about it the right way and just try to control things I can control, and this contract doesn’t change that. It won’t change how I go about that.”

Gonzales walked only 56 batters in 2019 and was unhappy about the two he issued Monday.

“I don’t try to give any free passes, so the kinks will be ironed out,” he said. “There was some offspeed pitches in there that I wasn’t too happy with, but as far as executing the fastball, I felt that was the best out of every pitch. Obviously room for improvement.”

“That’s his thing. He had a hard time landing his secondary pitches,” Servais said. “They got a couple of balls up in the air and they took off.”

NOTES: The Cubs were without manager David Ross for the third straight day, and Ross has yet to make his managerial debut because of illness. Bench coach Andy Green guided the Cubs against the Mariners. ... RHP Taijuan Walker had his scheduled Thursday start pushed back. He pitched live batting practice Monday and will work in another simulated game situation before starting a spring training game, Servais said. Walker, who is in contention to be in the starting rotation, has made one start since mid-April 2018 because of elbow surgery and rehab from it.