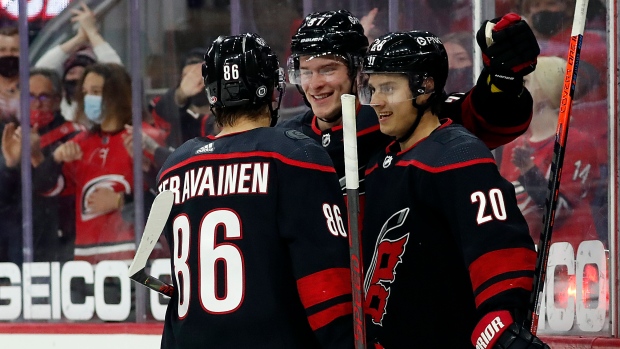 RALEIGH, N.C. — Sebastian Aho scored twice in the second period on the way to a hat trick, helping the Carolina Hurricanes beat Chicago 5-2 on Monday night and eliminate the Blackhawks from post-season contention.

Dougie Hamilton and Martin Necas also scored for the Hurricanes, who entered this game leading the race for the Presidents’ Trophy and home-ice advantage throughout the playoffs. They led nearly the entire way, going up 2-0 in the opening period and then getting Aho's scores to blow the game open en route to their fourth straight win.

Carolina has earned a point in 11 straight games, winning eight, with coach Rod Brind'Amour saying his players “haven't come off the gas at all" since clinching a third straight playoff trip.

“We have to keep getting better because you get to the playoffs, you just can't have bad habits," Brind'Amour said. “You can't have things creeping into your game.”

The good news for Carolina is that Aho's game is looking sharp in the final homestand of the regular season.

He got his first goal when he buried a pass from Andrei Svechnikov — who stayed on his feet to lead a terrific charge up the middle of the ice for the 2-on-1 chance at 4:42 of the second.

Aho followed that minutes later by finding himself alone in front of the crease on the power play. That gave him time to set up and perfectly redirect the puck high past Malcolm Subban off a low pass from Hamilton.

That lifted Carolina to a 4-0 lead by midway through the period, pushed Aho's point streak to eight games and knocked Subban from the game in favour of Collin Delia.

Aho capped his night by beating Patrick Kane to a puck and scoring the empty-net putaway at 18:44 to earn the hat trick.

“You always have that feeling that you can be better," Aho said. “There's so many situations on the ice, you think, ‘I could do that better or this better.' Yeah, that's the kind of mindset I have, that I try to make every shift matter and it's just to ... make the right plays on the ice.”

Ian Mitchell and Alex DeBrincat scored for Chicago, which also had a goal from Philipp Kurashev disallowed on replay review because Pius Suter impaired Alex Nedeljkovic's ability to play his crease position.

Chicago, sitting at sixth in the eight-team Central Division, has lost five straight and seven of nine to end its post-season chances.

“I think it doesn't really change the message as far as what we're trying to do,” Blackhawks coach Jeremy Colliton said. "We've got to get better, we've got to keep improving.

“You've got a bunch of first-, second-year guys, even third-, fourth-year guys. We're trying to learn as a group how we need to play to have success and be at the top competing against teams like Carolina.”

The 23-year-old Aho had three goals and nine assists in his point streak entering Monday, a tear that helped make him the Central Division Star of the Month for April.

Subban allowed all four goals on 18 shots before being pulled for Delia, who finished with 19 saves in his third appearance this year — and first since Jan. 17.

“It feels nice but we still didn't win the game," Delia said, “so that's the ultimate goal. ... But it definitely did feel good.”

Carolina got winger Jesper Fast back after he missed five games with a lower-body injury. Fast saw more than 13 1/2 minutes of ice time.

Goaltender Petr Mrazek, who has missed the past six games with a lower-body injury, was the backup to Nedeljkovic on Monday night.

The teams meet Tuesday in the second game of a three-game set as the Hurricanes close their home schedule.