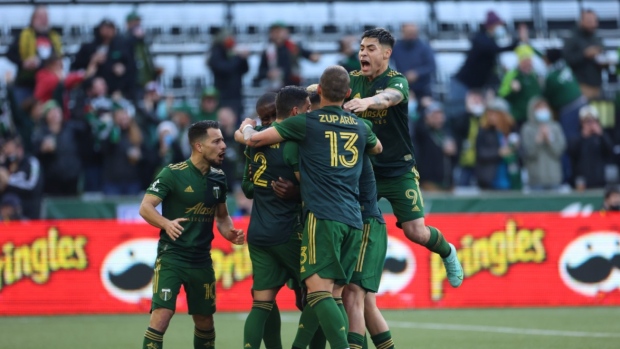 PORTLAND, Ore. (AP) — Sebastian Blanco scored the go-ahead goal and adding an insurance score and the Portland Timbers eliminated Minnesota United from the MLS playoffs with a 3-1 opening-round victory Sunday.

The fourth-seeded Timbers advanced to play the top-seeded Rapids in Colorado on Thanksgiving Day.

“We feel relief. But we cannot relax. We congratulate every body, but now we need to focus on Colorado," Blanco said. “They have a very, very good team at home. Very strong. We have only four days to prepare for that game. So we focus now on the next game.”

Minnesota goalkeeper Tyler Miller was held out of the match after testing positive for COVID-19. He announced his test results on Twitter just before kickoff.

“Unfortunately I’ve tested positive for Covid. Gutted to not be there with the boys in Portland but all the confidence they can get the job done, and I’ll be back soon as possible,” he wrote.

The Timbers set a club record with 17 wins this season and won three straight heading into the postseason.

The fifth-seeded Loons needed a tie or win over the LA Galaxy on Decision Day to make the playoffs, ultimately earning the spot with a 3-3 draw.

Minnesota won both games against the Timbers this season, extending a seven-match unbeaten streak in the series. Portland hadn’t beaten the Loons since 2018.

United took the early lead on Fragapane's left-footed knock into the corner of the net. shot from very close range to the bottom left corner.

The Timbers pulled even on a header from Mabiala off a corner in the 43rd minute. It was his first goal of the season.

Portland took the lead just moments into the second half when Sebastian Blanco scored from just inside the box. Blanco had taken a hard hit at the end of the opening half and was grasping at his right side following the goal.

Blanco remained in the match and scored his second from distance in the 66th minute.

“I have pain but I'm happy,” Blanco said with a smile after the game.

“It’s was not ideal obviously, and then you worry that somebody else, one or two others could be affected. But at the end of the day, Dayne’s a quality goalkeeper. I don’t think we can blame him for anything today," Heath said.

The game got chippy in the 85th minute when both sides got into a shoving match. Mabiala and Fragapane were both shown yellow cards, as was Minnesota's Joseph Rosales.

The Timbers won the MLS Cup in 2015 and were runners-up in 2018. It is the fifth straight season they’ve advanced to the postseason.

The Loons were playing in the postseason for the third straight year. They won their first playoff game last year in the opening round against Colorado, then beat Sporting KC in the conference semifinals before falling to the Sounders.

“We’ll come back hopefully stronger,” Heath said about heading into the offseason. "Certainly this is the best group we’ve had since I’ve been here. So if we can add to it, which is going to be the objective in the offseason, to add one or two pieces with it, make us stronger in certain areas, then that’s what we’re going to do.”