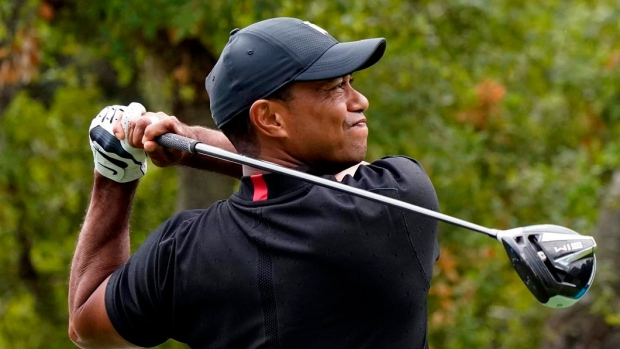 THOUSAND OAKS, Calif. — The scorecards of Sebastian Munoz and Tiger Woods were unusual for different reasons Thursday in the Zozo Championship at Sherwood. That was only good news for one of them.

Munoz twice holed out for eagle from a combined distance of 219 yards. He also had eight birdies. Throw in a wild tee shot for double bogey, three bogeys and only five pars and it added to an 8-under 64 and a one-shot lead.

“Not a normal round,” Munoz said.

That especially was the case for Woods. For the first time in his 1,277 rounds on the PGA Tour as a pro, he made bogey or worse on three par 5s in a single round. That led to a 4-over 76 — by two shots his worst score in 49 rounds at Sherwood Country — that left him 12 shots out of the lead and in no mood to talk.

Munoz, the Colombian who played his college golf at North Texas, finished off his bizarre round by saving par from a narrow section of the front bunker with a 15-foot putt on the 18th hole.

He was one shot ahead of Tyrrell Hatton, the hottest golfer this month, and Justin Thomas, who had a hot finish. Hatton won the European Tour flagship event at Wentworth, flew to Las Vegas for the CJ Cup and tied for third. Thomas shot 29 on the back nine at Sherwood. They each had a 65.

Whether it was shocking to see Woods so far back on this course is a matter of perspective. He is a five-time winner at Sherwood, along with five runner-up finishes, against small fields in a holiday exhibition. He was playing only his third competitive round in the last seven weeks, and his first since missing the cut in the U.S. Open a month ago.

The rust was evident, and a few bad breaks didn't help his cause. He pushed his tee shot on the par-5 11th to the right, normally not a big deal except the ball stopped rolling in the dirt between two trees about 18 inches apart. Woods couldn't believe it when he got to his ball and wasted no time inverting a sand wedge to hit out left-handed.

That didn't make it back to the fairway, and the rough is thicker than he ever saw it in the 12 previous times playing Sherwood in December. The course recently over-seeded with rye and the grass is thick, as it was at Shadow Creek. He laid up from there and made bogey.

On the par-5 13th, he sent his tee shot again to the right, partially blocked by a tree. He tried to gouge out a mid-iron and it didn't make it to the second section of fairway. Another vicious swing from thick grass advanced it only 130 yards to a bunker some 50 yards to the hole. The sand shot didn't quite reach the green. His putt from 55 feet didn't reach the hole He made double bogey.

And then on the par-5 16th, a tee shot down the right side took a wild bounce to the right, and a marshal carefully going down the bank toward the creek was not a good sign. He took a penalty drop, laid up and sent wedge just over the green, forcing him to get up-and-down for bogey.

The one smile came on an 85-foot putt for birdie on the 14th. Smiles were rare on this day.

Munoz smiled in disbelief. His round began with a three-putt bogey from 7 feet. He followed with four birdies on the next five holes — he missed a 7-foot birdie putt on the par-5 fifth — and then he hammered a 9-iron from 168 yards that faded gently toward the hole and rolled in for an eagle.

“Once you see the guy throw up the touchdown sign, it's good,” Munoz said of a volunteer behind the green.

His other eagle looked like it might be a bogey. He hit 3-wood that crashed into a tree near the 16th green, and Munoz was waiting for it to splash down in the creek. Instead, it went backward into the fairway, 51 yards from the hole.

“My caddie was like, ‘Be aggressive. You already took a risk on shot No. 2, so might as well just keep going.’ All right, sure,” he said. “So I throw it up there and find the hole. It was pretty sweet.”

Roughly half the 78-man field shot in the 60s on a pleasant day in the Conejo Valley. Woods wasn't the only one who didn't take advantage. Rory McIlroy two double bogeys sandwiched around two birdies at the end of his round of 73. Phil Mickelson, a winner last week on the 50-and-older circuit, needed four birdies on his last eight holes to shoot 72.