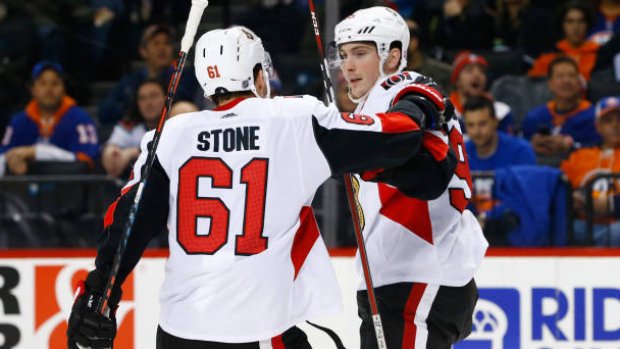 One of the fascinating decisions facing sellers as the trade deadline approaches is whether or not to rest a player who is likely to be traded in order to protect their value.

Think about the NHL landscape as we approach Feb. 25.

Columbus’ Artemi Panarin and Sergei Bobrovsky are two of the marquee names available, and all reports indicate that they will be with a new franchise in short order. But the team is also in the middle of a playoff race, and trading two of their most skilled players at the deadline would likely sink their postseason chances. Even having the players miss a handful of games to buy insurance against the risk of injury could have an impact on the Jackets’ playoff likelihood, which currently sits at around 89 per cent.

Ottawa’s situation may be more complex. The Senators have been effectively eliminated from playoff contention and have no first-round draft pick to tank for this season. Moreover, they have two marquee names in Matt Duchene and Mark Stone potentially on the block and neither has put pen to paper on a contract extension.

The team has been vocal about a rebuild that will aim to turn their ship around in the 2020-21 season, and you have to imagine that a Stone and/or Duchene trade would help accelerate that process because of the sheer number of picks and prospects the Sens should be able to acquire. There’s no argument to be made for ‘showcasing’ either player, considering how many hundreds of games of tape are available for both forwards. Ultimately, there seems to be no real reason to play either guy until an extension or trade has materialized.

But the merit of sitting a player in the short term to protect a franchise’s health in the long term isn’t often broached in the NHL – even as it becomes an increasingly popular move in other North American leagues.

The New Orleans Pelicans recently sat superstar Anthony Davis for some time as they tried to work on an NBA trade deadline deal that ultimately failed. (The Pelicans actually reintroduced Davis into the lineup after the deadline and he got injured, which led to the termination of general manager Dell Demps.)

Considering how heightened the dialogue is elsewhere, it’s likely only a matter of time before we start seeing this more often in NHL circles.

I was curious as to what type of risk an NHL team carries as it relates to a player incurring a significant injury over a period of games. MGL has done a great job capturing historical player injuries and we can leverage this data set to not only calculate the likelihood of a player incurring an injury over a given sample of games, but also the likelihood of that injury being significant in nature.

First, let’s take a look at the last nine seasons (I omitted the lockout-shortened season for a multitude of reasons) and associated injury rates. The data is almost completely flat: at 19 skaters per game over both the regular season and postseason, we see about a 2.0 per cent likelihood of a player incurring an injury driving future game(s) lost: 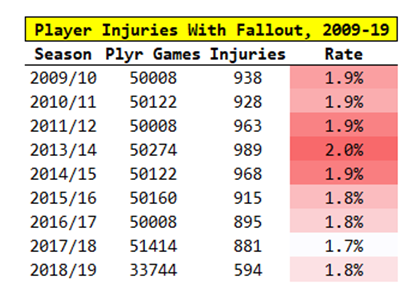 These injury rates will obviously vary from player to player – Alexander Ovechkin has a much lower likelihood of being injured considering his track record, for example – but at a macro level this is effectively saying that a team has a 1.9 per cent chance of any player being injured in a way that would impact future NHL games. This would be inclusive of both injuries incurred during games as well as injuries incurred between games (e.g., practice).

From there, we should then understand the distribution of games lost due to injury. That involves going through the injury reports and seeing how many games players lost due to myriad injuries: 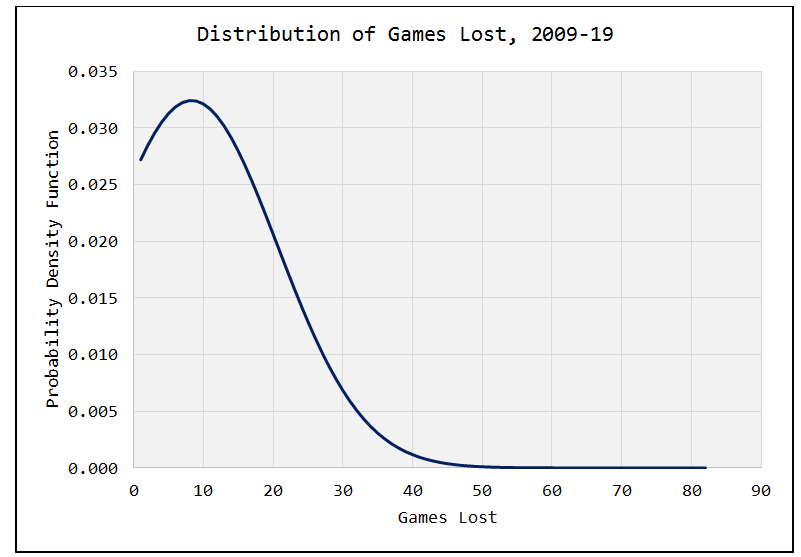 The two per cent injury rate of materiality might have scared you initially, but the distribution of games softens that number quite a bit. The reality is the NHL season is hard to get through without some sort of injury, but the majority of those injuries are more minor in nature. (In the 2017-18 season, as a point of reference, only 103 skaters – 11 per cent – played a full 82 games.) More than three quarters of injuries incurred see a player miss about 10 games or fewer. But the tail is really the point of concern. Although long-term injuries are more the exception than the norm, we do see these a fair bit based on the distribution above.

The trade deadline comes with approximately 20 games left in the NHL schedule. Based on this distribution, there is actually a nine per cent chance of a player incurring an injury that extends that length of time. That is the type of injury that could scuttle a trade at the deadline.

Based on this, let’s look at it again from an Ottawa or Columbus perspective. Both teams have four games remaining until the trade deadline, and based on the above, we can reasonably calculate the risk that either team incurs by way of dressing any of their stars. A Monte Carlo simulation can show each team’s danger zone, or the chance of an injury submarining a trade at the deadline for any single game:

The math says that every player has a greater than 99 per cent chance of either escaping a game with an injury or incurring some sort of small injury that would likely resolve within a calendar week (and thus not barring any type of trade at the deadline). That’s quite high! But that leaves about a one in 100 chance of a player, in any given game, incurring some sort of injury that could shelve them for multiple weeks or the full season. It’s this type of injury that, depending on severity, could kill a potential trade.

A once per cent single-game risk doesn’t seem like a lot, but for teams like Ottawa and Columbus with multiple games remaining until the trade deadline, it can be enough to justify parking players for some period of time. The chance of a Panarin, or Bobrovsky, or Duchene, or Stone being injured in any one of the next four games is actually higher than one per cent, because for each player you need to throw the dice four separate times. And it only takes one unlucky throw to put a player on the shelf for quite some time.

It’s a tricky situation to manage for the likes of Jarmo Kekalainen and Pierre Dorion (and other general managers around the league), but in some cases even a low level of risk is enough to justify a conservative approach.

In the case of Columbus, you might be comfortable because of the playoff race. In the case of Ottawa, I wouldn’t be dressing either of the two stars anytime soon.