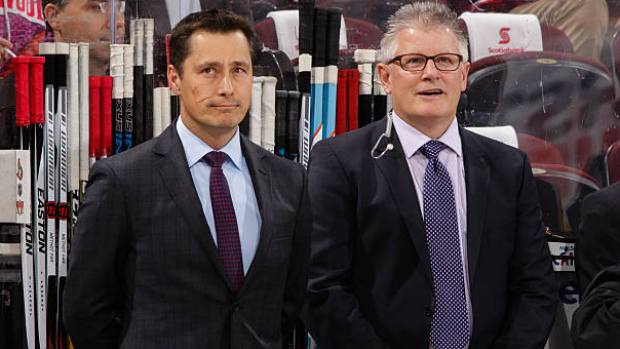 General manager Pierre Dorion said he decided a change was needed Thursday night after the Senators lost their sixth in a row, falling to the Edmonton Oilers.

Dorion said he slept on it before advising team owner Eugene Melnyk of his decision on Friday morning.

"We just felt as recently as probably this morning Guy wasn't going to be our coach moving forward," Dorion said. "For both parties, we just felt it was time to move on. Obviously we made the decision and that’s why we named Marc as interim coach until the end of the year."

The Senators say they will begin a search for a full-time head coach after the season.

"We will hire the best coach available," said Dorion. "That meets our needs for this team to grow. To set a culture that we need to have success and to put us on the right path. We did that last time and we're going to do it again when we hire the next coach, whether it's Marc or someone else."

"It's one of those things if you keep doing the same thing and the results aren't there, then it's tough to keep players engaged," said Borowiecki. "I'm not here to sling mud or anything like that. I'm just trying to be as objective and honest as I can in the situation. There needs to be a way to keep players engaged to show that there's maybe a change to be had or a change to be made that's going to help us progress forward and when it doesn't happen, personnel change will happen."

The move continues a tumultuous eight-day stretch for the Senators.

The team traded its three top scorers for younger players and draft picks before Monday's trade deadline after the Senators couldn't come to terms with pending free agents Mark Stone, Matt Duchene and Ryan Dzingel on new deals. All three of those players were healthy scratches last Thursday in New Jersey, raising speculation that deals were imminent.

On Wednesday, a plan for a new downtown arena for the Senators was killed after the National Capital Commission announced mediation had failed in an effort to resolve a dispute between Melnyk and project partners.

After the trade deadline, Dorion acknowledged that Boucher had a tough task guiding the team through weeks of speculation.

"I've probably made his job pretty difficult the last few weeks, and we're going to support him," Dorion said Monday.

But Dorion seemingly had a change of heart between now and then, opting not to let Boucher finish the final season of his contract.

Boucher guided the Senators to Game 7 of the Eastern Conference final in his first season with the squad in 2016-17, but couldn't duplicate that success.

Ottawa missed the playoffs last season after making an early trade to acquire Duchene in an effort to improve their playoff chances. The Senators sent a first-round pick to the Colorado Avalanche in the deal and now that selection could be first overall this year.

In the team release, the Senators said they would be looking for a new head coach who excels in the following:

-A teacher who will focus on the development and growth of each player on the team;
-A listener who encourages feedback from players and the coaching staff;
-A communicator who lets every team member know where they stand and what is expected;
-A tactician who brings structure and game planning that will enhance our rebuild.

Boucher, a 47-year-old native of Notre-Dame-du-Lac, Que., was previously head coach of the Tampa Bay Lightning from 2010-13. He then took a job in Switzerland before landing with the Senators.

Crawford, 58, was in his third season as a Senators assistant coach before being promoted to interim head coach. He has served as an NHL head coach for 1,151 games, guiding the Quebec Nordiques, Colorado, the Vancouver Canucks, Los Angeles Kings and Dallas Stars.

The Belleville, Ont., native won the Stanley Cup in 1996 with Colorado.

Crawford's first game as interim coach will be Saturday on the road against Tampa Bay.​