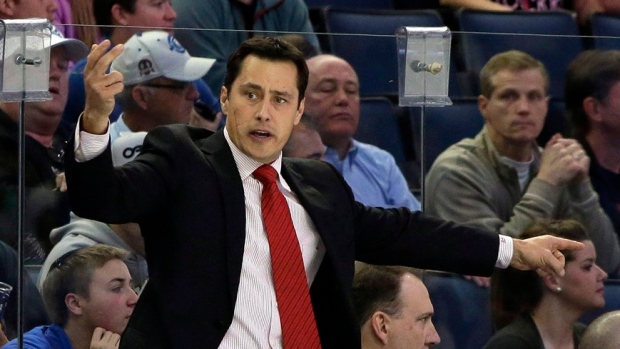 OTTAWA - Guy Boucher is the new head coach of the Ottawa Senators.

The 44-year-old Boucher was announced as the 12th head coach in Senators franchise history on Sunday, replacing Dave Cameron, who was fired on April 12. Boucher has spent parts of the last three seasons as the head coach of SC Bern of the National League A in Switzerland, posting a 44-29-5 record.

Before that, he spent two-plus seasons as the head coach of the National Hockey League's Tampa Bay Lightning, posting a 97-78-20 record in 195 games. Boucher led the Lightning to the Eastern Conference Final in 2010-11.

"Over the past three weeks, general manager Pierre Dorion and our hockey operations staff have undertaken a thorough and comprehensive search for our next head coach. Following a detailed evaluation of all coaching candidates, there was overwhelming consensus that Guy was our top candidate," said Senators owner Eugene Melnyk in a statement. "We wanted a great coach and this process yielded our top pick. I couldn't be happier. On behalf of the entire Senators organization, the great city of Ottawa and our fans, I want to welcome Guy, his wife Marsha and their three children, Vincent, Mila and Naomi."

According to TSN Hockey Insider Darren Dreger, Marc Crawford is expected to be named an associate coach on Monday.

In addition to his time with the Lightning and SC Bern, Boucher spent one season as head coach of the American Hockey League's Hamilton Bulldogs, leading them to a North Division Championship in 2009-10. For his efforts, he was awarded the AHL's Louis A. R. Pieri Award as its coach of the year.

He was the head coach of the Quebec Major Junior Hockey League's Drummondville Voltigeurs for three seasons. Boucher led Drummondville to QMJHL regular season and playoff championships and a berth in the Memorial Cup in 2008-09.

Boucher has also represented Canada internationally on several occasions, including winning a goal medal as an assistant coach at the 2009 IIHF world junior championship. He was the head coach for Canada at both the 2014 and 2015 Spengler Cup, winning gold in 2015. He was an assistant coach with Canada's men's under-18 team on three occasions, including 2008 when the team won a gold medal.

A native of Notre-Dame-du-Lac, Que., Boucher graduated from Montreal's McGill University where he also played with the Redmen hockey club from 1991-95. Boucher has degrees in four different disciplines: sports psychology, biosystems engineering, environmental biology and history.