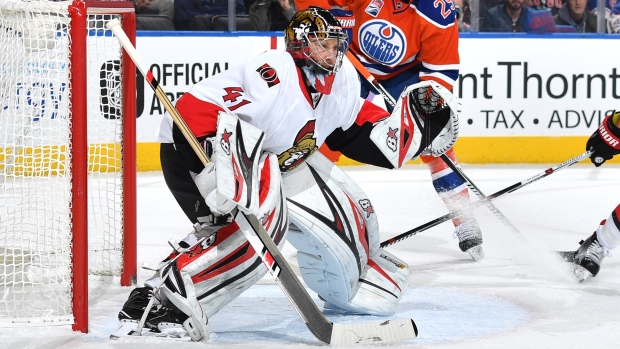 NEW YORK — Ottawa Senators goaltender Craig Anderson, who rebounded from personal tragedy to post a resilient shutout Sunday night in Edmonton, has been named the NHL's first star of the week.

Anderson took a leave of absence last week following the cancer diagnosis of his wife Nicholle, but he returned with a 37-save shutout in a 2-0 triumph over the Oilers.

The veteran goalie also made 22 saves in a 3-0 victory over the Vancouver Canucks on Tuesday. Anderson stopped all 59 shots he faced last week, earning consecutive shutouts for the third time in his career.

The 35-year-old native of Park Ridge, Ill., has a 5-1-0 record with a 2.46 goals-against average, .921 save percentage and two shutouts in six appearances this season.

Dubnyk stopped all 94 shots he faced in three starts to lead the Wild to a 3-0-0 week and first place in the Central Division. Dubnyk blanked Boston, Buffalo and Dallas to become the first goaltender in Wild history to post three consecutive shutouts.

Weber registered three goals and two assists, including a pair of game-winning goals, to power the Canadiens to a 4-0-0 week and the top of the NHL's standings.