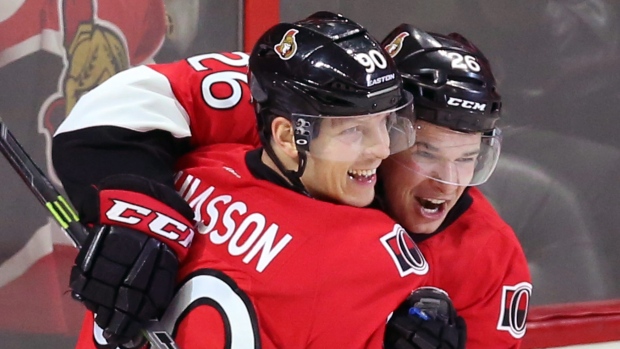 OTTAWA - Third-period leads haven't been safe this season when facing the Calgary Flames. And the Ottawa Senators nearly learned that the hard way on Sunday.

Erik Karlsson scored the winner in the sixth round of the shootout as the Senators held on to defeat the Flames 5-4 after blowing a four-goal lead in the final 20 minutes.

"We knew they were going to come (in the third) and they're a team that doesn't quit and we saw that tonight," Senators forward Mika Zibanejad said.

Alex Chiasson, Milan Michalek, Mark Borowiecki and Mike Hoffman scored in regulation for the Senators (30-23-11) while Craig Anderson made 42 saves.

Kris Russell scored twice for the Flames (36-25-5) while Joe Colborne and Mikael Backlund had one each.

Colborne scored at 6:56 of the third to end the shutout bid of Anderson, who was making his first start since Jan. 21— a span of 17 games.

Russell scored a power-play goal at 11:28 and 59 seconds later Backlund ended a wild scramble by beating Anderson and trimming the Senators lead to 4-3.

"We just really got away from our game," Borowiecki said. "We got a little too cute and I think maybe we thought it was point night going into that (third) period— rack 'em up and pad the stats.

"It was unacceptable for us but two points is two points."

Russell tied the game at 17:45 to force the extra session and shootout.

"4-0 is a pretty big lead going into the third so we were all really excited when we scored the fourth one." said Backlund.

"We always want the two points and we're disappointed but at the same time we made a huge comeback and we'll bring that with us."

The win was the third straight for the Senators, who have won eight of their past nine and have collected at least a point in all of those games.

The game was the last in a seven-game road trip for the Flames, who were displaced as the Brier took over their home rink in Calgary. They finished the trip with a 4-2-1 record.

"It would have been nice to get that last (win) but at the same time if you told us we were going to get one point going into the third period we probably would have took it," Russell said.

"We're a resilient club and this was a good road trip. At different times different guys stepped up and we're going to need that going down the stretch."

Chiasson opened the scoring at 12:14 of the first period and Michalek gave the Senators a 2-0 with seven seconds to play in the first with a wrist shot that beat Karri Ramo.

In the second period, after a scramble in front of Ramo, the puck made its way back to the point where Borowiecki fired his first goal of the season at 2:34.

Hoffman then upped that lead to 4-0 at 7:10 and in the process chase Ramo from the net after he allowed four goals on 23 shots.

Jonas Hiller came in for Ramo and finished with 19 saves.