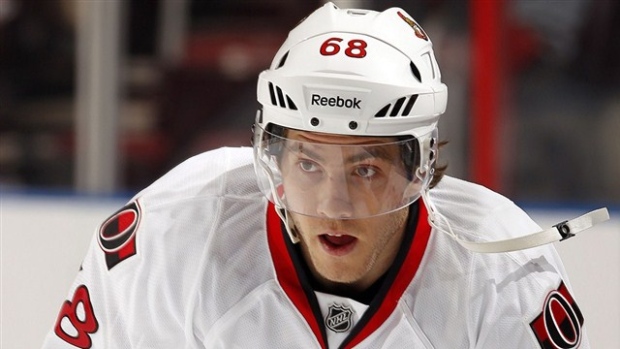 Last week, the NHLPA served notice of 23 players who filed for salary arbitration. However, simply filing for salary arbitration doesn’t necessarily mean that the terms of your next contract will be resolved by the independent third party. In most instances, the player and team bridge the gap before the hearing date. Resolving the matter before arbitration has obvious benefits – for one, the team doesn’t have to argue why the player doesn’t deserve the money/term he’s requesting in front of that very player.

But, there are a handful of instances every year in which the teams cannot resolve the contract dispute before the hearing date, and leave the fate of the next deal up to the arbitrator. Often times, it’s a team trying to mitigate potential cap damage after a player’s “breakout” season. In some cases, the club may be in the right – a player may have ridden a fluky-hot shooting percentage all year, scoring a bunch of goals that smoothed over other critical performance issues. In other cases, the player’s for real, and the team’s just trying to keep costs down as much as possible.

If there’s one player who fits the ‘this is probably headed to arbitration’ bill, it’s Ottawa’s Mike Hoffman. TSN’s Frank Seravalli noted that the sides aren’t close, and it’s not hard to understand why. Hoffman’s camp is rumoured to be asking something in excess of $4-million AAV in light of his 27-goal season. On the other side, you have Ottawa’s position: Hoffman’s not your prototypical blue-chip prospect (he’s a soon-to-be 26 year-old with fifth-round draft pedigree, and he was shuffled down the lineup at times this year due to concerns about his defensive game.

Of separate interest: the 2015 off-season marks the first time ‘enhanced stats’ can be used at arbitration. Unfortunately, the only enhanced stats that can be brought to the arbitrator are those featured on NHL.com, whose statistical offerings have been perplexingly limited and, in some cases, completely inaccurate. The site pales in comparison to the likes of War on Ice and HockeyAnalysis, both of which feature comprehensive data sets that allow interested parties to piece through seemingly infinite channels of information.

Still, there are basic 5-on-5 numbers that can be parsed from the NHL.com site, and it could play quite beneficial to Hoffman’s camp in the event the sides do make it to arbitration. Were I playing the role of Hoffman’s counsel, I would be quick to point out that my player was extremely productive in the minutes he was given – easily more so than what appears at the surface. And, by extension, that my player’s production may have actually been stunted by coaching usage/deployment.

Consider the scatter below, which shows last year’s forwards by both goals per-60 and individual shot-attempts per-60. Where does Hoffman sit? 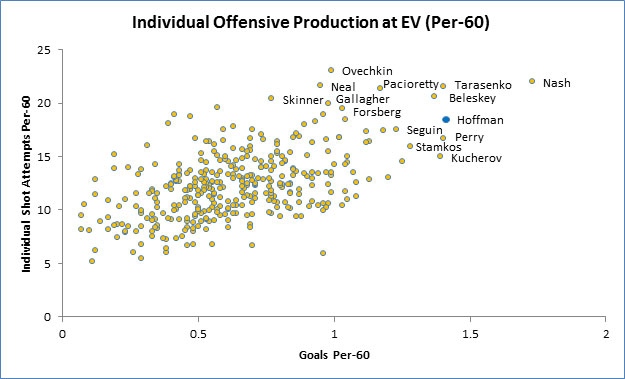 Obviously being in the top-right is a positive indicator here – it means you were frequently scoring 5-on-5 goals and were sustaining said goal-scoring, at least in part, by individual shot generation. Hoffman’s in the upper right echelon, a group which is generally comprised of elite attacking forwards. I noted 13 other forwards I’d say are comparable, either by shot generation, or goal generation, or a combination of both.

The combined cap hit of those forwards for next season? About $5.5-million. And note that two forwards in that group – Nikita Kucherov and Filip Forsberg – are in line to command mega-deals out of their entry-level contracts.

But, as alluded to earlier, the usage/deployment issues are only part of the battle that Hoffman’s camp will face. They’ll also likely hear about purported defensive inefficiencies in his game – the root cause for his frequent drops in the lineup, and by extension, his limited ice-time in a number of games.

Here’s an interesting rebuttal to that assertion. We can take the same group of talented forwards and isolate strictly on their defensive performance – by goals against per-60 and shot-attempts against per-60. If the assertions of Hoffman were true, it’d seem that he’d stick out like a sore thumb here, especially when being compared against some of the super-skilled forwards above. 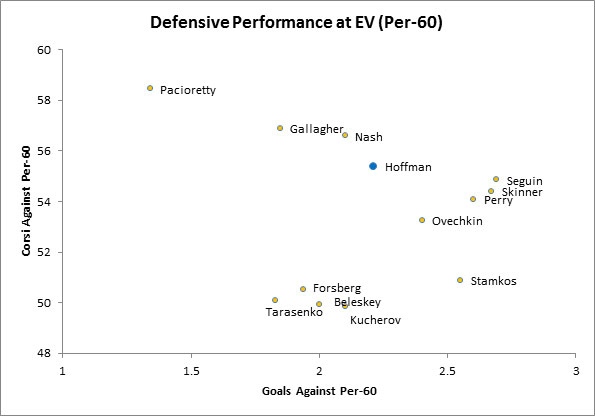 Well, not exactly. Hoffman sits dead center – his suppression of shots better than the likes of a player like Max Pacioretty, his suppression of goals better than the likes of Steven Stamkos and Corey Perry. This doesn’t necessarily endorse him as a good defensive player. But, it does draw attention to the reality of the contracts many of these other first and second-line wingers are currently signed to, and Hoffman’s argument as to why he should be paid commensurate to the benchmark they as a collective group have set.

For now, this is just the first step for the NHL and NHLPA at introducing the most basic forms of “new age” statistical analysis into the formulation of player contracts. With improved data (and NHL.com generally catching up with all of the superior sites around the net), negotiations could look substantially different years down the road.