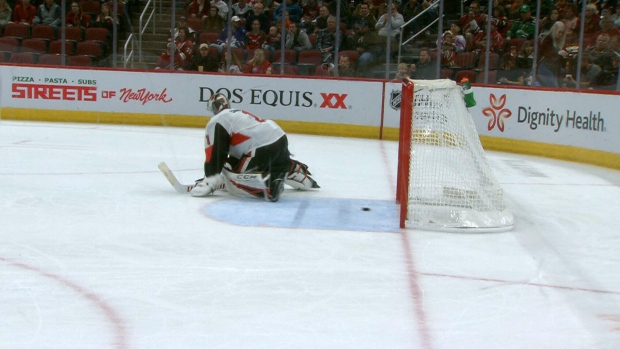 The Ottawa Senators placed struggling goaltender Mike Condon on waivers on Wednesday following his disastrous start against the Arizona Coyotes.

Tough, tough night in Arizona. At $2.5 mil this season and $3 mil next year...this has to be about getting him more games and building confidence. https://t.co/hc9XHEpfkd

Condon allowed three goals on 11 shots against the Coyotes on Tuesday, highlighted by allowing a shorthanded goal to Derek Stepan from the opposing blueline. He was pulled following that goal with just under five minutes left in the first period.

“I had to do something,” Senators head coach Guy Boucher said after the game. “He’s a hard-working guy. He’s a good person. It’s tough for a coach to pull a goalie out. The team needed it. We needed something.”

Boucher went on to explain, though, that the rough night wasn’t entirely Condon’s fault.

“We got out-competed in the first period,” he said. “That doesn’t usually happen. That’s the one thing we’ve had from the beginning. Our compete level wasn’t there at all in the first period and after that, it was an uphill battle.”

Condon, who is in his third season with the Senators, carries a $2.4 million cap hit through next season.