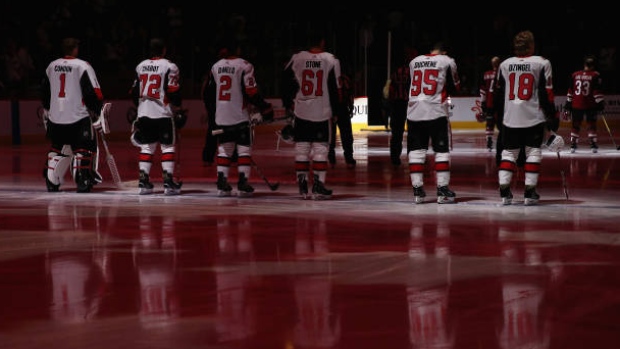 A group of Ottawa Senators players apologized on Monday after they were captured on camera mocking one of their coaches and laughing about their woeful penalty kill in a video posted online.

The Senators players said they were unaware of the camera in an Uber vehicle, which recorded their candid conversation on an Oct. 29 ride in Arizona.

The video was first reported on by the Ottawa Citizen after appearing on YouTube and Twitter. The Senators players visible in the recording - Chris Wideman, Matt Duchene, Chris Tierney, Thomas Chabot, Dylan DeMelo, Alex Formenton and Colin White - issued a joint apology through the team for their comments, specifically about assistant coach Marty Raymond.

"We want to apologize publicly to Marty Raymond, our teammates and coaches for our comments in Phoenix Arizona on October 29," the players' statement read. "Our private conversation was recorded without our knowledge or consent. We’re passionate about our team, and focusing on growing together. We are grateful for the support of our fans and organization. This is an important learning experience, and we will do better.”

Coach Guy Boucher also issued a statement on Monday night responding to what the team called a "privacy breach against its players and coaches" and offered his support for Raymond.

“Nothing is more important to us during this rebuild than making sure our players and coaches are fully committed to our plan, our values and our system of play," Boucher said in the statement. "We have every confidence in Marty Raymond’s coaching; in the effort and determination of our team; and in the sincerity of our players’ apology. We are now treating this as a team matter, and will be making no further comment to the media.”

In the video, the Senators' players criticized Raymond, the team's 29th-ranked penalty kill and their inability to slow teams down off the rush.

“Marty Raymond, the only coach in NHL history to have the worst power play and the worst PK within a calendar year,” Duchene says, drawing laughter as he referenced Senators assistant coach Martin Raymond.

Wideman responds: “Do you notice that when [Raymond] runs the video, if you actually do pay attention, he doesn’t ever teach you anything? He just commentates what’s happening.”

Duchene then says: “Here’s the other thing, too. We don’t change anything, ever. So why do we even have a meeting? I haven’t paid attention in three weeks.”

The Senators, who are currently on a 1-4-2 slide, lost 5-1 to the Coyotes on Oct. 30 the night after the video was captured in a game in which goaltender Mike Condon allowed a goal from Arizona’s far blueline.

Raymond, 51, is in his third season as assistant to Boucher in Ottawa. He also served under Boucher in Tampa Bay from 2010-13 and in the AHL.

“In practice, when we break out against you guys,” Duchene says, “we get in every time.”

Uber policy “allows driver-partners to install and use video cameras to record riders for purposes of safety,” however, not every locality requires drivers using recording equipment in vehicles to disclose fully to riders that they are being recorded to obtain consent.

Uber Canada general manager Rob Khazzam said the video was a "clear violation of our terms of service" in a statement released on Twitter.

“A video was released by the media today of several Uber passengers being filmed without their consent while having a private discussion during a trip in Phoenix. This is a clear violation of our terms of service and we worked hard to investigate this issue,” Uber Canada general manager Khazzam posted on Twitter. “Filming or recording passengers without their consent is totally unacceptable and if reported / detected, we will investigate and take action to preserve our communities [sic] privacy and integrity. In this specific case, we made efforts to have the video taken down.”