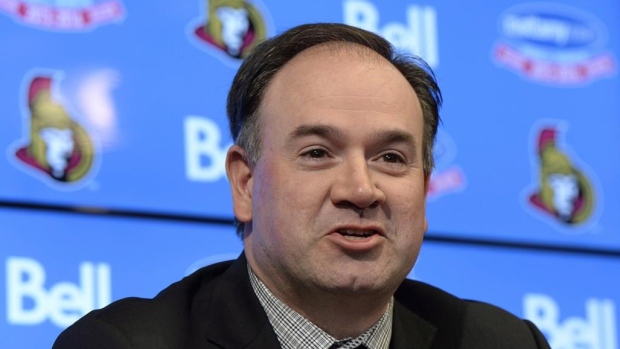 OTTAWA — General manager Pierre Dorion is going to get some help rebuilding the Ottawa Senators.

The Senators confirmed with a statement on Saturday that the club is planning to hire a new president of hockey operations to work with Dorion moving forward.

"The Senators intend to hire a president of hockey operations to support and provide guidance to the general manager, and to fill the void left by the late Bryan Murray," the statement said.

"The position is integral to the success of the hockey club, especially as we continue our rebuilding process, hiring a top-notch candidate to fill this role is critically important."

Ottawa is currently last in the 31-team league with a 26-43-6 record, and has been in a full rebuild mode since the off-season when the Senators shipped out former captain Erik Karlsson in September.

Top forwards Matt Duchene, Ryan Dzingel and Mark Stone were all traded for future assets at this year's trade deadline in February.

The club has 17 combined draft picks within the first three rounds over the next three NHL drafts.

The statement added that Dorion's ability to stockpile assets for the future is the reason why owner Eugene Melnyk "continues to have full confidence in Pierre Dorion and his team," and that "the Ottawa Senators have become an attractive destination for hockey executives."

Bryan Murray, who joined the organization in 2004 as head coach before becoming general manager in 2007, died of cancer in August 2017.