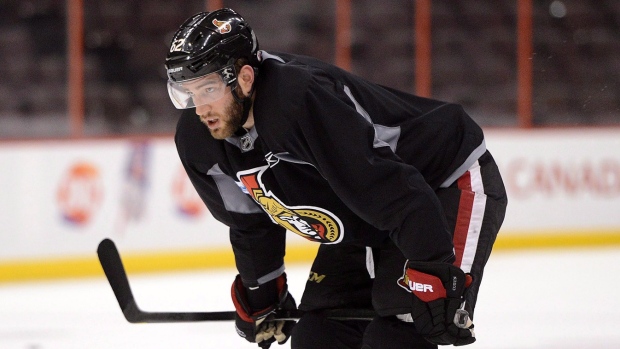 With a logjam at defence, the Senators traded Gryba to Edmonton on Saturday for prospect Travis Ewanyk and the 107th pick.

"We had too many defencemen," Senators general manager Bryan Murray said. "It allows us to play Jared Cowen on a regular basis now. It gets us down to seven defencemen."

Murray's other goal was to clear room to sign unrestricted-free-agent defenceman Chris Wideman, an offensive-minded player he thinks is ready for NHL duty. The longtime GM believes Wideman will be particularly useful in three-on-three overtime situations.

While Gryba likely goes on to a third-pairing role with the Oilers, a move he called bittersweet, Cowen should get a chance to play much more regularly for Ottawa.

Murray blamed knee, hip and other injuries for Cowen's career path slowing down a bit. If Cowen is healthy, Murray wants coach Dave Cameron to keep him in the lineup.

"The biggest thing for him, like every young player you've got to put him on the ice and let him play," Murray said. "If you're in and out of the lineup, it affects you mentally as much as physically."

The deal was Ottawa's second at the draft after sending Robin Lehner to the Buffalo Sabres for the 21st pick. The Senators took centre Colin White there.

"That we think is going to be a really important player in the future for the organization," Murray said. "But he's a young prospect, it'll take time to find out what he really becomes. All the prediction and all the evaluation that we have is he's a real good player."

White was Ottawa's second selection after drafting QMJHL defenceman Thomas Chabot 18th. With their second-day picks, the Senators drafted right-winger Gabriel Gagne at No. 36, centre Filip Chlapik at No. 48, defenceman Christian Wolanin at No. 107, left-winger Filip Ahl at No. 109, defenceman Christian Jaros at No. 139 and goalie Joel Daccord at No. 199.