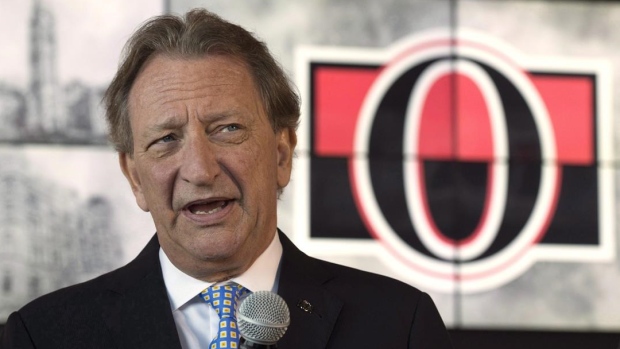 OTTAWA — The Ottawa Senators fired back at Ottawa Mayor Jim Watson after he told reporters on Wednesday the NHL team wanted the city to pay for an arena on a piece of land controlled by a Crown corporation.

The dispute between Senators owner Eugene Melnyk and RendezVous LeBreton Group partner John Ruddy made headlines last Thursday when the National Capital Commission said the group needed to resolve their internal issues by January or else the Crown Corporation would have to consider other options for LeBreton Flats, located close to downtown Ottawa. The following day, Melnyk filed a $700-million lawsuit against Ruddy and others, saying the joint venture failed because of an "egregious conflict of interest on the part of Trinity (Group) and its principal, John Ruddy."

Watson weighed in on the issue again Wednesday, prompting a response from Ruszkowski.

"At city hall's own urging, the partners in RLG took part in preliminary discussions that were characterized as strictly exploratory," Ruszkowski said. "This was because city hall had not yet received a mandate from Council to officially begin negotiations with RLG at the time. In that context, numerous options for the development of the site were discussed; including, for instance, the adoption of Edmonton’s arena development model. When informed that this was impossible, RLG moved on. At no time did (Capital Sports Management Inc., a company owned by Melnyk) or Eugene Melnyk demand the city build an arena.”

Ruszkowski also brought up the last major stadium issue in Ottawa — the development of Lansdowne Park. The area includes TD Place, home of the five-year-old CFL Redblacks, of which Ruddy is a part owner.

“It is worth noting that the mayor's remarks suggest a double standard. While he is adamant that government support will not be extended to build an NHL arena, during his tenure as mayor, he has supported the City of Ottawa's funding of roughly half of the redevelopment of Lansdowne Park, at a cost of about $210 million."