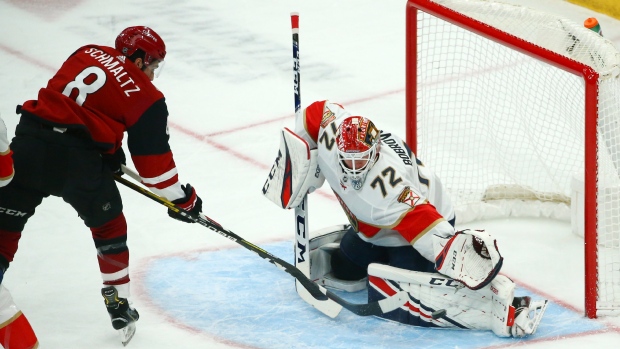 Florida allowed 10 total goals in back-to-back losses to the Kings and Golden Knights before arriving in the desert, but played a much tighter defensive game against the Coyotes.

“Today was a team win. They blocked shots, they finished checks, they back checked,” Bobrovsky said. “It was smart defence, smart puck management."

Kuemper was solid in his return after missing 28 games with a lower-body injury, stopping 23 shots. He gave up a goal to Frank Vatrano in the second period and Hoffman's 25th of the season on a power play in the third.

Brad Richardson scored for Arizona, which missed on numerous good scoring chances to lose for the third time in four games.

“We didn't capitalize. That's it,” Coyotes coach Rick Tocchet said. “We had a lot of chances, they didn't have much and we didn't score. That's the game.”

The NHL's highest-scoring team early in the season, Florida has struggled since the All-Star break, slipping to 11th in the Eastern Conference. General manager Dave Tallon opted to shake things up a little at the trade deadline, sending centre Vincent Trocheck to Carolina for Erik Haula, Lucas Wallmark and a pair of prospects.

The Coyotes took the opposite approach, opting to stand pat while sitting eighth in the Western Conference.

Arizona did get a big boost with the return of Kuemper, who had been out since Dec. 19.

Still the NHL's save percentage leader, Kuemper was sharp early in his return, turning away a couple of good chances in the first period.

“I felt better as the game went on,” Kuemper said. “The more shots you face, the more you just start playing again. I felt good.”

Bobrovsky made some tough early saves, stopping Taylor Hall and Nick Schmaltz from close range early. Richardson beat him late in the first period, scoring a short-handed goal from the slot on a rebound of his own shot.

The Panthers turned up the pressure in the second period and Vatrano beat Kuemper to the stick side on a shot through traffic from the top of the right circle.

Borovsky made two rapid-fire saves on Conor Garland and Oliver Ekman-Larsson in the final minute to send the game to the third period tied 1-all.

Both goalies made difficult saves early in the third period and Kuemper made a sliding stop on Hoffman during a power play midway through.

Hoffman scored seconds later, though, beating Kuemper glove side from the left circle on a feed from Jonathan Huberdeau along the backboards.

“Sergei did a great job for us, we were able to clear pucks in front of him, did a good job on breakouts,” Panthers defenceman Aaron Ekblad said. “It was a full five-man unit by the Ds and our wingers locked down the points and did a good job of forcing everything to the outside.”