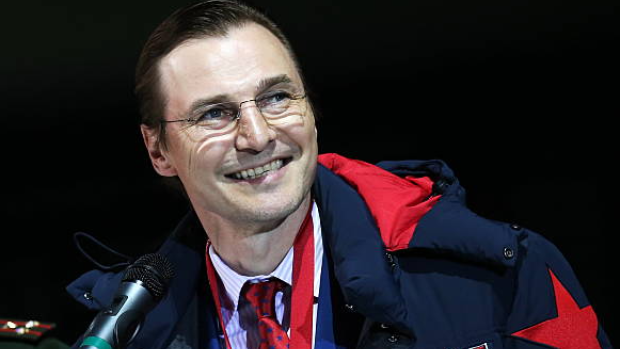 Former NHL winger Ilya Kovalchuk will serve as general manager for the Russian Olympic Committee at the 2022 Olympics.

Kovalchuk, who last played in the NHL during the 2019-20 season with the Los Angeles Kings, Montreal Canadiens and Washington Capitals, was named to the position on Monday. The 38-year-old won a gold medal with the Olympic Athletes from Russia at Pyeongchang 2018, his fifth Olympic games.

The coaching staff of the senior national team for the 2022 Olympic Games has been revealed!

Gonchar, who played 20 years in the NHL as a defenceman, served as an assistant coach with Pittsburgh Penguins for three season before parting ways with the franchise in 2020. A Stanley Cup champion with the Penguins in 2009, he won a silver with Russia at the 1998 Olympics in Nagano and a bronze at a Salt Lake City 2002.

Fedorov is currently serving as head coach of CSKA Moscow in the KHL, having taken over the position in July. The 51-year-old won three Stanley Cups with the Detroit Red Wings during his playing career and was also a part of Russia's Olympic teams in 1998 and 2002. He was inducted into the Hockey Hall of Fame in 2015.

Nabokov will serve as the goalie coach for ROC in Beijing. The 46-year-old played 14 NHL seasons and represented Russia at the 2006 and 2010 Olympics, with Russia failing to medal on both occasions. The Calder Trophy winner in 2001 retired 2015 after spending the season with the Tampa Bay Lightning.