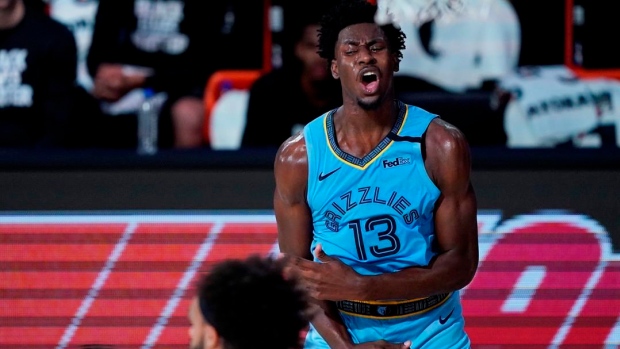 With the bulk of free agency value attributed to injuries at this point, approaching the trade market is your best bet to finding sustainable upgrades for the back half of the fantasy season.

As my colleague Fabio Lucarini alluded to on Monday, knowing where you stand will dictate what risks you take. If you’re settled atop the standings, look to add some injured players that your bottom-feeding opponents can’t roster. If you’re struggling to make the playoffs, now’s the time to take some gambles on high-upside moves.

There are two categories of NBA players I’ve highlight below: Players involved in trade rumours and players on teams with COVID-19 rescheduled games. 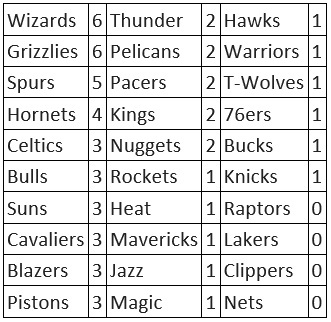 As it stands, the NBA intends to have every team wrap up the regular season playing 72 games. Some of these postponements have been added to the first-half schedule but the majority will be filled in March onwards.

The All-Star break is March 5-10 and the NBA has committed to releasing the second-half schedule prior to it.

While arming yourself with this data doesn’t necessarily swing the balance of trades, be mindful of what six extra games could be. That’s 16 per cent more production than any of the Raptors, Lakers, Clippers or Nets players. Using Bradley Beal as an example, he’ll provide roughly 200 bonus points in the second half.

The Grizzlies organization hasn’t been particularly transparent about his recovery thus far. From EVP of basketball operations, Zach Kleinman, saying he’ll “be out a minute” back in November to coach Taylor Jenkins only disclosing “they’ll be taking a big picture approach” late in January, it’s hard to pinpoint his exact return date. Jackson Jr.  successfully had surgery in August and will be six months removed come this weekend.

Current Jackson managers will undoubtedly be frustrated and I’d be willing to bet they’re at the bottom of your standings.

This is a perfect play for playoff-bound teams for two reasons:

1. Even if Memphis gradually ramps him up, considering the white glove approach they’re using, his re-injury risk seems relatively low.

2. Given the six postponed games they had in January, Jackson managers might not realize how much of a blessing that was for his fantasy outlook.

If your league has multiple IR slots, Jackson is a prime high-risk, high-reward play; he was a top-70 player last season with room for improvement.

Part of being a savvy manager is taking calculated gambles when others are cautious.

With the NBA season being as unpredictable as it’s been in 2020-21, capitalizing on the current trade rumours is a good way to extract incremental value in fantasy trades.

Allen had a decent debut as the full-time starter on Monday and now is the time to pounce before he drops a monster performance for his managers.

The 22-year-old centre has been a top-85 player over the last two seasons but through 10 games as a starter this year, he’s logged 31.1 mpg good for top-60 production.

The Cavaliers seem fully committed to the rebuild and Allen is a perfect fit for this young core. He’s never averaged more than 26 mpg in three seasons but should those minutes get bumped up, he could be a league winner.

Looking at his per-36 numbers (16.9 ppg, 12.4 rpb, 2.3 bpg) it’s easy to visualize him providing top-50 value. Combine that with his elite field-goal percentage and you have yourself one of the most roto-friendly bigs in the game.

I’ll come out admitting I was bearish on Plumlee heading into the season. Even though he was walking into an expanded role in Detroit, similar to Jerami Grant, I was in ‘believe it when I see it’ mode. Through 25 games this season, I’ll admit I was wrong.

The two things that stand out this year? His improved free-throw percentage and his rebounding.

Once a gigantic liability in free-throw efficiency (46 per cent in 2017-18), he’s improved his clip to a career-high 71 per cent which doesn’t hurt you at 2.6 attempts per game.

He’s currently rebounding at a career-high clip (8.9 rpg) and should only see that production increase if Blake Griffin gets moved. While it’s possible Detroit ships him out for a big, I’d imagine they slide Saddiq Bey into the starting five, a player who’s never profiled as a plus-rebounder.