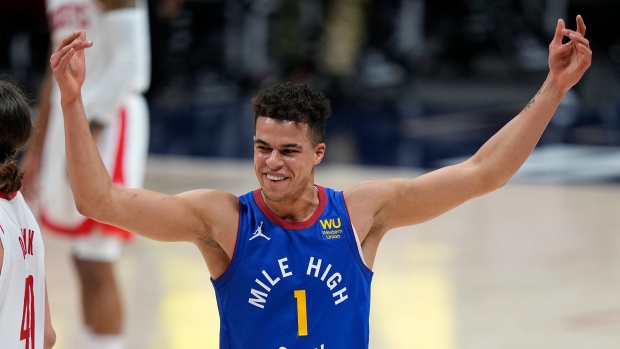 It’s Week 5 in the NBA, a fifth of the fantasy basketball regular season is complete, and the time has come to start making tough choices regarding your roster.

There’s a fine balance between responding to current player performances and sticking to your pre-season opinions.

Is your player adjusting to a new team? Are they recovering from an off-season injury? Do they have a track record of starting seasons slowly?

Escalation of commitment is one of my favourite concepts from psychology and economics that applies to fantasy sports. Pulling the plug on draft mistakes is tough on the ego. Nobody likes being wrong. The key is to evaluate information in the moment and determine if your player’s struggles will continue in future weeks.

A good exercise to go through is to create a definition of what constitutes a droppable player. It’ll always be case by case but have a plan for the player you’re considering moving on from.

For example, if player X doesn’t average more than 10 points per game for the next week, find a replacement. If player Y ranks outside the top-150 after Z number of games, adios.

Here are five players with an ADP inside the top-120 that are on the hot seat:

As the highest-ranked player on this list, his poor performance coupled with a concerning injury makes him the toughest choice of the five. Coming out of high school in 2017, MPJ was one of the top recruits nationwide but suffered a lower back injury, which required surgery. The following year in the NBA draft, he dropped to Denver at pick 14 due to injury concerns and missed his entire rookie season.

Should you be worried this injury is serious? Absolutely. Is it bad enough to drop him to the wire? I’d advise against it.

If you have an IR-spot, slot him in there and hope his recovery is smooth. At this stage if you’re not willing to have MPJ sit on the bench, I guarantee someone else will, given his immense upside. His poor production is partly offensive inactivity, but I’m willing to bet this injury is related.

If anything, MPJ is a prime buy-low candidate. His fantasy manager is likely losing right now, if you can afford to be a man down for a few weeks, try to claw him for a top-100 player and hope the poor start is related to this injury.

Drafting rookies for fantasy purposes can be a crapshoot. Sorting out the Magic’s production for this season was equally puzzling. Even with Markelle Fultz and Michael Carter-Williams on the shelf, Cole Anthony went undrafted in most leagues. No one knew for certain how their usage would play out.

The knock on Suggs during pre-season was shooting. 13 games in, he’s the second worst impacting player on field goal percentage across the league. Add in his 3.5 turnover per game, and he’s likely killing those two categories for whoever he plays for.

If you drafted Suggs, I understand why you’re still holding. It’s one thing to roster a player who’s not contributing to your counting stats, it’s another when they’re actively killing you in two of three efficiency categories.

I would give him a week or two of slack before dropping him in 14-team leagues. Forty-three per cent of his shots are coming at the rim (great distribution for a guard). He’s unfortunately shooting 42.6 per cent at the rim.

Pay attention to that stat over the next week or two. He might not figure out the three-point shooting, but if he can lift his production at the rim, he might retain his value.

Barrett is in head coach Tom Thibodeau’s good books, is a key part of New York’s team and continues to play significant minutes. Unfortunately, he is underperforming in every critical category concerning his fantasy production: shooting efficiency and defensive stats.

I don’t like his downward trending steal production, which has gone from 1.0 SPG as a rookie to 0.4 this season. His shooting improved in his sophomore season but has regressed through these first 14 games. He’s almost outside the top-200 and is a borderline drop in 12-team leagues.

His shooting might come and go but I’d measure his long-term potential on the defensive categories. If he goes another week averaging less than 0.5 combined steals and blocks, I’d drop him in 14-team leagues.

It’s been a tough start for the Porter clan (no they’re not brothers). KPJ has shown us his upside; don’t forget he dropped a 50-point, 11-assist double-double last year.

The problem? That performance was just one of five games where he shot above 50 per cent from the field. This season, he’s yet to achieve that feat.

In points leagues, you can get away with rostering him. In 9-cat leagues, I’d be shocked if you’re above .500. His counting stat production is simply not good enough to offset the negatives. He’s such a liability on your efficiency, the only way you can extract value from him is building a turnover and field-goal punt team.

If you have the James Harden, Russell Westbrook, LeBron James build, kudos to you. If you’re not actively tanking those categories, he’s a drop in the deepest of formats.

Here’s the only player on this list whose efficiency isn’t the primary cause for panic. After finishing 48th in fantasy last season, Bogdanovic has dropped off in every counting stat this season while his minutes remain the same.

Last season, he started slow and then went down with a right knee injury costing him 25 games. When he returned, he continued to struggle until he got promoted to the starting lineup due to a De’Andre Hunter injury. That’s when things got wild.

In his final 25 games of the year, he finished the fantasy season as the fifth-ranked player, supported by his 4.3 threes per game (second to Stephen Curry), 50 per cent field-goal percentage and 90 per cent clip from the charity stripe.

There’s sadly some déjà vu happening right now. Hunter is out for the next two months with a wrist injury, and this could potentially be the catalyst needed to jump-start Bogdanovic’s season.

His usage rate sits at 17.0 this season and I’d pay attention to that number, hoping it creeps back above 20.0. Considering Atlanta lost six games in a row prior to Sunday, perhaps the team should try to incorporate him more into their offence.

If this Hunter injury changes nothing over the next two weeks, that’s when I’d consider moving on and selling him for pennies on the dollar.