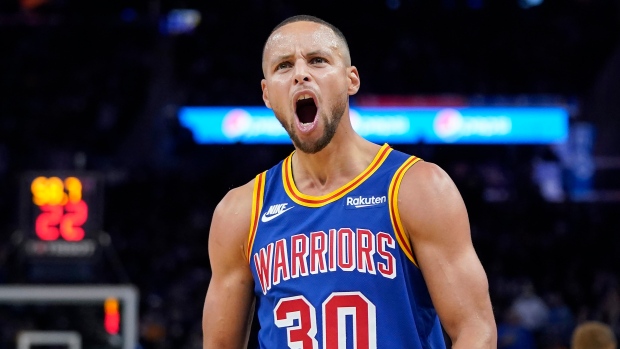 After opening the season at +800 to win NBA regular-season MVP, Stephen Curry has already separated himself from the pack with multiple iconic performances through the first 10 games.

He christened the league on opening night by upsetting the Western Conference favourites, the Los Angeles Lakers, with his first regular-season triple-double since his 2015-16 MVP season.

He followed that performance up in his next game with a 45-point, 10-rebound double-double in a 115-113 win over the Los Angeles Clippers.

Then on Monday, Curry took the basketball world by storm with a 50-point, 10-assist performance, surpassing Wilt Chamberlain as the oldest player ever to achieve that feat at 33 years, 240 days old.

Some would say it was a monumental achievement; some think it’s a whole bunch of nothing.

Steph Curry had this Hawks announcer in his feelings last night 😂

Following Monday night’s performance, oddsmakers immediately adjusted Curry’s odds to win MVP to +250. As of this morning, Curry is +300 to win MVP.

He has the “best player on the best team” narrative rolling right now, but let’s review the standard MVP discussion points:

- Games played – Healthy and active in all 10 games

With league-wide scoring and free-throw rates down, Curry is out here reminding us how he changed the game forever.

Don’t forget, since his back-to-back MVPs, NBA league scoring averages have been trending upwards for seven straight seasons and he’s a huge reason.

Rookie of the Year Race

Three weeks in, a lot has changed in the ROTY race:

If Mobley were to win the award, he’d join Karl-Anthony Towns as the only centre-eligible player over the past 16 years to hoist the Eddie Gottlieb trophy. He’s first in blocks, second in rebounds, and third in points amongst rookies.

Cunningham, the first-overall pick, began the season with a sprained right ankle and is slowly shaking off the rust, adjusting to NBA defences.

Green has flashed his potential with some electrifying dunks and heat-check moments from beyond the arc (including an eight three-pointer night), but he’s yet to establish the consistency needed at the professional level.

Jalen Green with the monster dunk on the break showing off some of his special bounce 🏀 pic.twitter.com/xZuhUvuUIL

Defensive Player of the Year Race

Rudy Gobert is working on his fourth DPOY award, a feat only achieved by Dikembe Mutombo and Ben Wallace.

He opened as the leader and is still the leader, but it’s getting a bit more crowded at the top:

Last season, Draymond Green, Simmons, and Gobert were the finalists for this award with all three of their teams finishing top five in defensive rating. While it’s early, none of the current leaders play for a top-five defence.

Adebayo’s Miami Heat and their revamped starting five have the highest ranked defence at sixth.

Sixth Man of the Year Race

It’s not often you see such dramatic swings this early, but Herro has been so hot it seems oddsmakers are already shutting the door on this award.

Through 10 games, the third-year guard is averaging 20.3 points, 2.8 threes, 5.5 rebounds, 4.0 assists, shooting 45.8 per cent from the field and 84 per cent from the line. Outside of Lou Williams, no player off the bench has averaged over 20 points or more in a season.

Of all the awards listed above, MIP is the biggest crapshoot of the bunch.

At the start of the year, no player was listed at shorter than +1000 and many of the current favourites weren’t even in the top-10.

Morant is averaging 26 points per game, a significant jump from his 19.1 clip last season. With so many scorers seeing their averages dip, the 2019 second-overall pick is going against the tide taking his game to another level.

As an added bonus, he’s led the Memphis Grizzlies to a 6-4 record, good for fifth in the Western Conference. I’ve gone on record suggesting he’s due for his first All-Star appearance this February.

Ja Morant dunk for the tie and a DEEP 3 for the lead 🔥pic.twitter.com/fNh3SBXCag